Adam Sandler is the Fallsview Casino Star of the Month 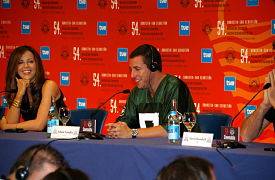 Hot summer program is awaiting all those who visit Fallsview Casino Resort in Niagara Falls this June, with line-up consisting of some of the biggest names in the entertainment industry.

During his prolific Hollywood career, he made a long list of movies, the majority of which as an actor, but also producing and writing many of them.

His latest business endeavour was in 2014, when he signed a deal with Netflix to make four movies for the popular American entertainment company.

You’re guaranteed to have a ton of laughs and a show to remember, with ticket prices starting at $175.

But That’s Not All

Sandler is just the tip of the iceberg when it comes to Fallsview offer in June.

The star of the 1978 hit, Grease, Olivia Newton-John will open the June program at Fallsview, performing on June 1 and 2, followed by A Night of Comedy, featuring Sinbad, Jim Breuer and Tom Papa, on June 3.

Richie Ren is performing on June 4 and 5, while all those looking forward to Dancing Queen will have the opportunity to see the show from June 8 to 18.

Sammy Hagar will appear for the first time at Fallsview, on June 21 and 22. The Red Rocker will be accompanied by Jason Bonham, Vic Johnson and Michael Anthony.

Pat Boone is scheduled to appear from June 27 to 29, while the Gypsy Kings will close the curtain on June repertoire, with their June 30 show.

The sale of tickets starts on Friday, with prices ranging from $25 for Dancing Queen, to $90 for Richie Ren. They can be purchased at Ticketmaster outlets, the Fallsview Casino box office and online at www.ticketmaster.ca.