The WSOP (World Series Of Poker) prestigious golden bracelet and the $10M cash prize went to Hossein Ensan, a German poker player who entered the World Series of Poker Main Event with the highest accumulative value of chips.

Ensan and Sammartino were the last two men standing after Canadian player Alex Livingston was eliminated as the third contender.

This year’s Final Table event was quite memorable, especially for Hossein Ensan who managed to gain an advantage in the previous games by piling up a considerable stack of chips. Ensan is the 50th poker champion of the world but getting there was far from easy. 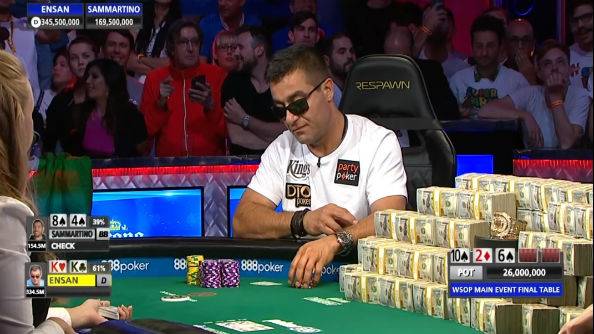 The showdown with Sammartino kept the spectators on their toes, and although confident about the outcome, Ensan did not underestimate his opponent. Holding over 60% of the total amount of chips in play, Ensan played aggressively, however, Sammartino held his ground and even took the lead at one point, reducing Ensan’s edge and melting away his tower of chips.

The battle for the title lasted four hours and it was impossible to predict who will inherit the last year’s champion, John Cynn. It was the 31st hand that finalized the game, with Sammartino going all-in on the turn with flush draw suited 8 and 4.

He was met with a snap-call from Ensan and his pocket kings, but the river was the pivotal card, costing Sammartino the title. With one spade away from the flush, the Italian player was forced to face the defeat after the Queen of Clubs was revealed.

Apart from having the honor of ranking as one of the top three WSOP contestants, Alex Livingston also bagged $4M cash prize. The Halifax native is a former chess champion who discovered his passion for poker through ESPN and social games. This is his second top-15 finish (he finished 13th in 2013), and he is still pursuing his first bracelet.

The 32-year old was the only contestant at the finals without the sunglasses, sporting a sweatshirt with Cabot Links logo and saluting his country with Nova Scotia flag hanging behind him. After a brief advantage, Livingston was eliminated in the 200th hand of the Final Table, when he went all-in holding a pair of Jacks, which was trumped by Ensan’s Queens.

He currently resides in Las Vegas, the gambling capital of the world, and spends four months every year in his hometown.