Home ❯ News ❯ This is Why You Should Always Gamble Online

This is Why You Should Always Gamble Online 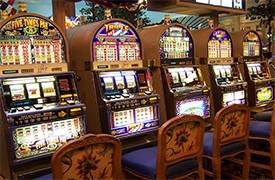 It was January 31, and Jan Flato was playing the Double Top Dollar slot machine at the Seminole Hard Rock Hotel & Casino in Fort Lauderdale, Florida. Unknown to him, he was about to win the biggest jackpot of his life, but which he could never claim.

You may wonder how this can happen, and we do as well. The answer is at the same time both very simple and complex, clear and confusing, logical and senseless.

But let’s start from the beginning. Flato, a regular slot jockey, entered the aforementioned casino that evening, accompanied by Marina Medvedeva Navarro, a friend whom he had known for two years. Little did he know what was about to happen.

According to Flato’s later statement, at one point he had asked his lady friend to push the button for good luck. She was definitely lucky, cause she hit the staggering jackpot of $100,000, a money that would soon put this friendship to the test.

Since Navarro was the one to place the wager, legally she was the one who won the money, which was confirmed after the video from surveillance cameras had been checked. So the casino had no other choice but to give her $50,000 in cash and a $50,000 check.

Although Flato claimed the money fed into the machine belonged to him, Navarro disputed his version of events. She did, according to her own words, offer him a cut of the money, but he refused to take it, and in the spirit of a true friendship she asked casino security to keep Flato at bay while she left the premises.

She even texted him a couple of weeks later, saying she missed him. We’re sure he misses $100,000 a lot more.

He added no lawyer had wanted to take his case, so he’d gone public to warn people what might happened to them.

We say you shouldn’t put your friendships to such a hard test. Stay at home, go online and play with your buddies and enjoy in quality time spent together. All your winnings will go straight to your account, and you won’t lose a friend.