To finish up the month of April, Red Tiger Gaming has launched a new title. Available at the best online casinos in Canada, Laser Fruits is going to be a smash hit. The biggest news about this release is its number of paylines… In Laser Fruit, players can find themselves spinning a slot game of over 60 million paylines. 60,466,176 paylines, to be exact. This alone will make the game incredibly popular in Canada. But this game isn’t all about the paylines. Laser Fruit is a stunning and very enjoyable slot overall. 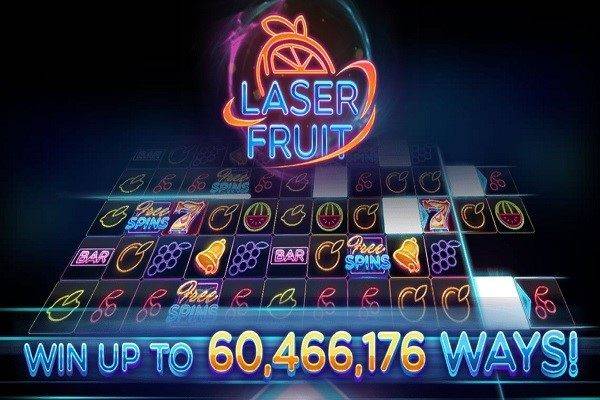 Entering Laser Fruit, players are met by five reels, three rows and 243 paylines. Many fans in Canada choose 243-payline games as they offer a huge number of ways to win. But, in Laser Fruit, that’s the tame way to play. Red Tiger Gaming wanted to deliver an exhilarating game. Chief executive Gavin Hamilton says that Red Tiger specializes in creating new and entertaining games. The brand new Laser Fruit is just that. Before its official release, Laser Fruit earned a lot of interest. Because the game is breaking new grounds, it’s already very popular. The slot is filled with all of the classic slot machine symbols. There are bells, bars, cherries, melons, and lemons. But the most important symbol is the free spins symbol. The symbol is a scatter, so three of them will trigger the special feature. There, neon blue lasers come in to expand blocks to the right and upwards. In doing this, even more paylines become available. The neon blue laser can also activate during regular play. On top of this, players can win up to 10,000x their stake. Laser Fruit lives up to its developers’ vision. It is indeed a thrilling and innovative game. Players will be rife with anticipation of the neon blue lasers.

Red Tiger Gaming continues to grow its reputation. It is already a household name among slot gamers in Canada. At the start of the year, Red Tiger was named the one to watch. With releases like Laser Fruit, it’s clear why. Another major event for Red Tiger came at the start of March. The developers proudly announced that their games had launched at LeoVegas. Offering Red Tiger games improved LeoVegas’ already stellar reputation. Luckily for the players of Canada, many top online casinos boast Red Tiger games. So all will get to play the newly-released Laser Fruit. Sink your exclusive to Canada bonuses into Laser Fruit at Betsafe, Guts and Super Lenny!   Gaming Intelligence: http://www.gamingintelligence.com/games/47203-red-tiger-offers-60m-ways-to-win-in-latest-slot-launch iGaming Business: http://www.igamingbusiness.com/press/red-tiger-gaming-launches-laser-fruit Gaming Intelligence: http://www.gamingintelligence.com/business/46170-one-to-watch-supplier-award-red-tiger-gaming iGaming Business: http://www.igamingbusiness.com/press/red-tiger-goes-live-leovegas