Attending the Davos economic summit in January, the governor of Canada’s Central Bank announced that trading in bitcoin was “gambling”. In an interview with CNBC, Stephen Poloz was asked to give his opinion on the cryptocurrency that’s been in the news a lot in the past few months. He says in the interview: “They are not currencies, I’m not really sure what they are. I suppose they are securities technically… There is no intrinsic value for something like bitcoin so it’s not really an asset one can analyze. It’s just essentially speculative or gambling.”

The Need For Caution

The question has special relevance after Bitcoin broke all records for value in 2017. But despite reaching a record high of over $25,015 per Bitcoin in December, other voices in Canada have also expressed the need for caution. This is because there are big fluctuations in its value. Some people even see this as a sign that it’s a bubble about to burst. Poloz isn’t alone in warning against seeing Bitcoin as an asset. Others, from the head of Denmark’s central bank to legendary US stock market guru Warren Buffett have said that trouble could be on the way. Nevertheless, many Canadians have started to see Bitcoin as a road to riches. There are also a number of online casino enthusiasts in Canada who see them as the perfect currency for gaming.

The Bitcoin Casino Boom in Canada 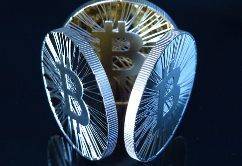 This has also driven a huge rise in the number of Canada casinos that now either accept Bitcoins as payment, including Jackpot City, top-rated on Online Casinos Canada. Looking at using Bitcoins from the players’ perspective, they have a number of features that are sure to be attractive. For example, transactions in cryptocurrencies are direct. This means that the normal time delay that you would experience using a checking account would not apply. For the casino, it also means that there are no bank charges to pay, only the lower ones levied by Bitcoin exchanges. Another advantage is the security of the blockchain technology that is behind the system. Once a transaction has taken place it can’t be reversed which can give real peace of mind for both parties.

Cryptocurrencies are also a great choice for players in Canada who don’t want their banks or credit card companies prying into their affairs. Anonymity is guaranteed once the Bitcoins have been purchased: Only the payer knows how they are being spent. Obviously, there are also some disadvantages for the Canadian online player too. For example, falls in value. Nevertheless, many people in Canada are choosing to gamble using Bitcoins. And while Stephen Poloz might not agree, it seems to be suiting them very well indeed. If you prefer to do your online gaming using good old Canadian dollars, we’ve plenty of choice for you right now. You’ll even get some fantastic bonuses too. Sources https://www.cnbc.com/2018/01/25/bitcoin-trading-is-gambling-canada-central-bank-governor.html https://techvibes.com/2017/12/21/the-biggest-canadian-blockchain-and-cryptocurrency-stories-of-2017 https://globalnews.ca/news/3887041/bitcoin-canada-invest/ http://www.cbc.ca/news/business/bitcoin-mine-canada-1.4436149