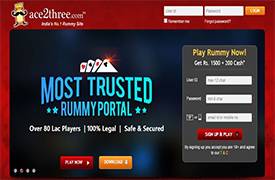 Clairvest Group and its foreign partners will pay between $90 and 100 million to purchase nearly 85% of Head Infotech shares.

At this moment, there is no official word on the acquisition, but it is expected to be announced in the near future.

After the deal is finalized, the consortium will acquire shares which include those belonging to Rajesh Agarwal, an entrepreneur from Hyderabad. Agarwal has substantial debts in his other company, BS Limited, and the sale of Head Infotech shares could bring him much needed money.

The CEO of Head Infotech, Deepak Gullapalli, will keep 15% stake in the company he himself founded in 2006.

Last year, Head Infotech was almost bought by Delta Corp, India’s largest gaming and hospitality company. It seemed the $100 million acquisition was a done deal, but Delta Corp management opted to veto the purchase, stating there were many risks involved in the whole affair.

The pride of Head Infotech, Ace2Three website, was India’s leading online rummy operator until last year when Rummycircle took over the leading position. Last year’s revenue was $26.3 million, while the company recorded the profit of $9.3 million.

However, Ace2Three is at this moment far behind Rummycircle in terms of earnings and overall market share, while another competitor, Junglee Rummy, is slowly emerging as a serious player in the business.

It remains to be seen what will be the final outcome of the negotiations, but whatever happens, the new owner will have to invest both time and money to improve the current market positions of the fallen giant.

Head Infotech is the largest Indian online gaming company. Founded back in 2006, the company takes great pride in Ace2Three.com which served more than 8 million players.