Canadian Poker Player Lose His Money in a Bizarre Incident 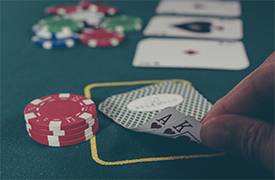 You could say Ha Van Nguyen was a somewhat successful poker player, but Lady Luck definitely wasn’t there on November 20, 2015.

On that unfortunate night, Nguyen lost $10,700, but he didn’t gamble it away. No, his money was confiscated by the Royal Canadian Mounted Police in connection with alleged use of drugs.

Well, ‘confiscated’ may seem a bit harsh, since ‘picked it up’ would be a verb to describe what happened.

Nguyen was driving through New Brunswick, when he spotted a police checkpoint. As any law-abiding citizen would do, he turned away, which seemed a bit suspicious to the Royal Canadian Mounted Police (RCMP).

We can all agree this is a bad moment to throw out a bag containing the aforementioned money. Not only that, but it is even worse to say you did that because you had a small amount of marijuana. But that’s just what Nguyen did!

The officers quickly found the bag and seized the money. And that’s when Nguyen’s ordeal began.

He did tell the police that the money was earned playing poker, he even told them he was returning from a night at the tables. However, the RCMP had no intention of returning him his money, since they believed it was connected with illegal drug activities.

But his rap sheet didn’t help in convincing the police he was innocent. Nguyen spent six months in jail, back in 2006, and was charged with similar offenses the same year this incident occurred. On both occasions, he was charged with a marijuana-related offense.

The court later ordered to test the money on drugs, and the results were positive. The court also ordered the RCMP to return the seized money to Nguyen’s lawyer, but this is yet to happen.

Nothing to Worry About

Losing more than $10,000 didn’t stop Nguyen from pursuing his passion, and it proved to be very lucrative. He won over $40,000 since the RCMP took his money away. The latest win was $30,171 – the first prize at the Atlantic Canada’s Poker Championship.

Luckily for him, he won’t face any criminal charges related to the 2015 incident, but it is hard to say whether he’ll get his money back…