Century Casinos is Building a New Venue in Alberta 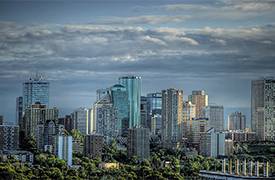 Century Casinos Incorporated has gotten the green light from the Alberta Gaming and Liquor Commission to build its new facility near Edmonton.

The new Century Mile Racing Entertainment Centre will be the fifth venue in Alberta operated by the American side, while the decision to build and operate a new horse racing facility was reached back in September.

The Colorado-based company also operates several casinos in its home state, including the facilities in the towns of Cripple Creek and Central City.

The new Century Mile Racing Centre, which will be located near the Edmonton International Airport, will have a mile long horse racetrack, with stables, barns, parking space for visitors, and indoor and outdoor racetrack viewing areas. But that’s not all since the Center will feature a slots-only casino with around 550 machines, along with off-track betting area.

Erwin Haitzmann and Peter Hoetzinger, Century Casinos Incorporated CEOs, said the new Racing Entertainment Centre had the potential to outshine a similar facility the company had opened in north Calgary.

They added the construction would be completed as soon as possible. They thanked Alberta Gaming And Liquor Commission, as well as other State authorities, for their trust and assistance during the whole process.

The location of the future Racing Entertainment Centre has a great potential since it is expected to bring the markets of two counties – Edmonton and Leduc – together, while the proximity of the airport and a highway being an additional benefit.

According to current estimates, the entire project will cost around $38 million and will take 15 months to be completed.

Century Casinos is a gaming company founded in 1992 and based in Colorado Springs. At this moment it owns and operates six venues in its home state and the Canadian state Alberta, along with 67% share in Casinos Poland, which operates nine casinos in this East European country.