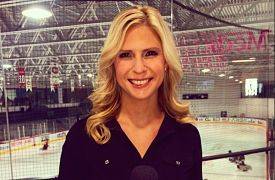 PokerVision Media is a new name in town, with an experienced player on their team to help them on their on-air debut.

The newest addition to their ranks is Chantal Desjardins, 35-year old sports broadcaster and comedian from Winnipeg, Manitoba.

As a seasoned sports commentator, Desjardins will definitely be a valuable asset to PokerVision Media’s broadcast team.

From Winnipeg to NHL

Desjardins started her career as a copywriter and later became a sports anchor and reporter for a local television station in her hometown.

She moved to Montreal in 2006, where she started working for CJAD radio. She also worked as a traffic reported, co-hosted several radio shows and by 2012 returned to CJAD, once again as a sports reporter.

The breakthrough in her career came in 2014, when she joined Sportsnet, where she hosted matches for NHL side Montreal Canadians alongside John Bartlett and Jason York.

Work Starts In Less Than a Month

We won’t have to wait much before we see her in action again. PokerVision recently signed a deal with Action Channel to start broadcasting in the United States from April 1. The company later announced the plans for a Canadian release to follow shortly afterwards.

The Executive Vice-President of PokerVision Programming, Malcolm Dunlop, is convinced that Desjardins will become an important part of their on-air family. On the other hand, Desjardins expressed her pleasure with the opportunity to work with PokerVision in setting new trends when it comes to sports coverage.

Aside from this, she also performs as a stand-up comedian, and apparently she’s quite good at it, since her shows in March, April and May are all sold out. She is also a die-hard poker fan, hosting a charity poker tournament to raise funds for The Leukemia and Lymphoma Society of Canada.