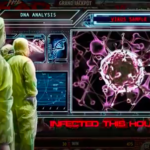 The game immerses players in a post-apocalyptic hell-scape where a father and daughter must struggle to outrun hordes of the undead to survive. The title is an attempt to give players the zombie style, apocalyptic theme that has been in vogue within popular culture for many years now:

Toni Karapetrov, Head of Corporate Communications at Habanero, had this to say: “The Dead Escape is one of our most thrilling releases yet, with players spinning their way to safety from the zombie invasion. The gory graphics and spine-tingling soundtrack will keep players on a knife-edge, in what is sure to be an intense gaming experience.”

Payouts and Action are Frighteningly High

While the game’s undead, apocalyptic theme and graphics are intended to raise the heart rate of players, the casino action here is anything but zombie like. The Dead Escape is a 5×3 reel slot featuring 30 different pay lines.

The max bet allowed is 10 coins per payline/300 coins on a single spin. Coin values range from $0.50 at the low end to $150 at the high end. The largest total payout is 1,500 times the stake, nearly a quarter of a million dollars if you are betting the highest coin value.

Bonus features are also constantly rising from the dead as well, bringing players more and more ways to win big. One of these is the “fight a zombie” feature, triggered when two human symbols align horizontally with a zombie symbol. This awesomely fun scenario will put you into a direct confrontation for your life with one of the undead itself.

Who will win the battle? You’ll have to play The Dead Escape to find out…

The Dead Escape is just one of a slew of new and exciting games being released in short order by Habanero. Other recently developed titles like Fire Rooster show the developer’s commitment to creating genre games for every type of player.

You’ll just have to hope that after experiencing the excitement and fright of The Dead Escape, you’ll still have enough life left in you to try the rest of them as well.