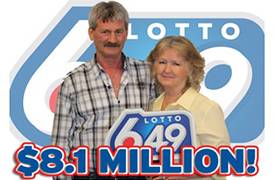 There are many people with Lady Luck by their side, but the Fink family from Edmonton seems to be close friends with her.

Barbara Fink and her husband Douglas are Edmonton’s Lotto champions. You probably may wonder how can someone be a champion in a game of chance, but the Finks certainly deserve to be called this way, since they recently won their third Lotto jackpot.

Last Friday, Barbara and Douglas won a staggering jackpot of $8,163,061 in the Lotto 6/49 draw. Barbara was the first to realize the fortune smiled upon them. After making sure they actually won, she called her husband, who was away at work, and told him they had become millionaires.

It can be quite a surprise to pocket a Lotto jackpot, but the Finks are getting accustomed to winning, though their previously won prizes weren’t as high as the latest one. Douglas won $128,000 back in 1989, although he had to share it with four of his friends, while their first win as a couple came seven years ago when the Finks managed to snatch a hefty sum of $100,000.

The total jackpot was $16.3 million, while the other half of it went eastwards to Ontario.

The only thing left to do for the fresh millionaires from Edmonton is to spend the money and the Finks already have the plans laid out. They will use the winnings to help their family members, especially their daughters, while the couple has already expressed the desire to buy a new house.

They also plan to spend a certain amount of money on traveling. Well, with $8 million dollars on hand, the only problem is to pick out the destination.