ELK Studios is quickly growing its reputation. They started off, as they all do, as a small games developer. But, with yet another top-quality game, ELK is getting even more popular. Their recent releases have been novel and introduce exciting gameplay dynamics. Now, Platooners is extending ELK’s already impressive portfolio. 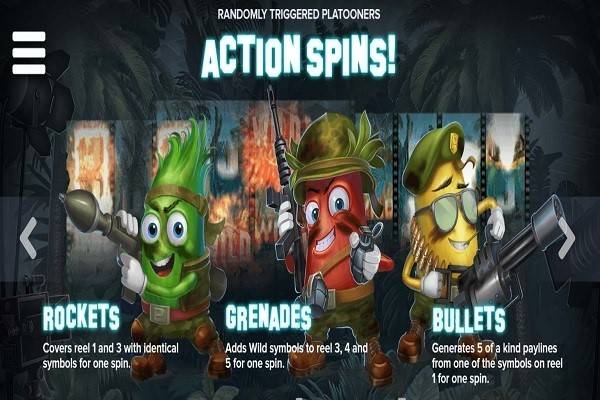 Platooners is a high-octane jungle-warfare slot game. The player fights alongside the three battle specialist characters against the Snakes of Fortune. With a prize of up to 250,000 coins, players in Canada will flock to this new game.

The three characters cannot be controlled but always aim to please. The green Minion-looking character fires rockets to cover reels one and three with identical symbols. The red chap throws grenades on the slot to add wilds. Your third ally, the yellow character, creates five-of-a-kind paylines from a symbol on reel one. Those familiar with ELK Studios games will recognize these characters. They appeared in the classic ELK game Bloopers.

ELK Studios games tend to get picked up by the best online casinos in Canada. Their interesting game tiles and thrilling features make them popular additions. Online casinos like Grand Ivy always find them to be among their most-played games. Platooners seems destined to become yet another popular ELK game in Canada.

A long line of epic games

By no means is Platooners ELK Studios’ first grand game. They have somewhat of a winning streak going with their game releases. One of the most recent and wildly popular slots is Birthday!. It may not look like much from its icon, but the game is packed with incredible features. During the party, the player can watch as many different features arrive and combine for big wins.

Lake’s Five also maintains a strong audience in Canada. The heist-themed slot sees the player work alongside fun characters. In it, Mr. Romano has been stealing animals. So, Mr. Lake assembles the elephant, parrot, alligator, monkey and goldfish for a heist.

But ELK Studios’ most popular game by far is the epic Kaiju. The innovative and stunning slot has players battle strange beasts (Kaiju) to save the city. Playing as the female human-android character HA-42 delivers huge thrills on the reels.

Platooners is the latest in a long line of almighty games from ELK Studios. It will almost certainly grow into a huge hit in Canada. We shall see if ELK continues its hot streak when they release their next game.

Play ELK Studios games with some bonus cash at Casumo and Guts today!