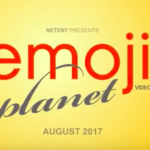 If you haven’t been living under a rock for the past decade, you’ll have come across the popular chat icons at some point in your life. The true aficionado may have even had an entire, complex conversation using nothing more than the adorable little symbols (it can be done; not that I would know….a friend told me…).

While it’s true that billions of people use emoji worldwide, here at Online Casinos Canada we don’t consider something to have truly “made it” in the popular culture until it’s been made into a slot machine. And as of now, we can officially say that emoji’s have arrived.

NetEnt will be releasing the game on August 8th. It will follow on the heels of a few other similar titles – most notably the Emoticoins slot by Microgaming – that have been recently released with the emoji theme as well.

Given the target audience is a younger crowd for whom emoji’s are a part of their everyday lexicon, the gameplay is also slightly changed from a traditional slot machine. The “cluster slot” design is used, in which the traditional spinning reels are replaced in favor of symbols “fall” onto the gaming area. This is most likely a nod to the same demographics’ love of non-gambling games such as Candy Crush, which feature the same setup.

On the one hand, having a bunch of colorful symbols on a slots game board is just plain fun. We fully endorse the concept from a pure gaming perspective.

However, at the same time the use of such obvious pop culture symbolism, combined with the “cluster” slot design mimicking popular non-gambling games, indicates this Emoji Planet is part of a broader outreach within the online casino industry.

As younger and millennial gamers become an increasingly large segment of the market, we can expect to see more and more games like Emoji Planet specifically designed to cater to the themes and gameplay they are most comfortable with.