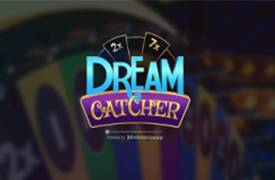 Despite the stiff competition that also included nine other shortlisted gaming suppliers, Evolution managed to return home triumphant with the notable award.

The prestigious Digital Product of the Year award aimed to recognize the most prominent feature, that is, the one that had the biggest impact in this kind of industry and it was granted at the Global Gaming Awards Ceremony in Las Vegas Sands Expo Center.

Dream Catcher is a visual masterpiece, a gigantic vertical money wheel that provides players with an opportunity to secure incredible wins and it is showcased in a live 24/7 game show. It was inaugurated back in February, at ICE Event happening in London.

The game boasts a familiar concept and bears a resemblance to Immersive Roulette, another Evolution game favored by many.

Thanks to a number of HD cameras set up in the studio, players can carefully monitor each phase of the wheel spin, using an extensive range of digital devices. It may also be interesting to mention that Dream Catcher is actually the first one in the Money Wheel category, to have been powered by Evolution Gaming.

Upon collecting the award, Chief Product Officer at Evolution Gaming Group Todd Haushalter added: “Creating a 24/7 live game show is something completely new, and we believe fresh concepts like this are a must if we want to expand Live Casino to a wider audience. Attention spans are growing shorter, and the desire to be entertained is greater so we wanted to do something that would be relevant to a YouTube watching audience because in many ways that is our competition for player’s time.”

The Evolution Gaming CPO additionally said that Dream Catcher is an entertaining and very simple game, equipped with generous multipliers that provide players with a chance to secure thousands of times the initial stake.