Home ❯ News ❯ Gem Rocks hits the shelves in Canada, and players are loving it!

Gem Rocks hits the shelves in Canada, and players are loving it!

Yggdrasil has boasted a superb start to the year. In 2017, they reported a revenue increase of 95% on 2016. The software developer looks set to continue upwards in 2018 as well. Yggdrasil has started with the release of a giant slot game. Gem Rocks went live at Yggdrasil online casinos on February 22. It may not have been out for long, but Gem Rocks already boasts a big player base.

Favourite casinos in Canada, such as Casino Room, Rizk and Kaboo, have seen fans flock to Gem Rocks. As hosts of Yggdrasil games, these casinos’ Canada players are used to playing top-quality games. Gem Rocks also meets the high standard that we’re used to from Yggdrasil.

Gem Rocks is filled with exciting gameplay and innovative features. It’s sure to continue to grow in popularity among players in Canada and keep awarding big wins.

Unlock the power of the gem-hearted giants 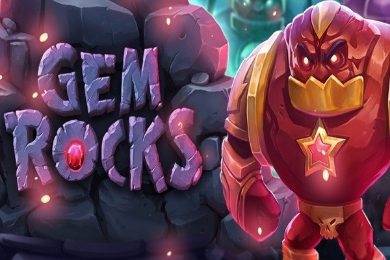 In Gem Rocks, Yggdrasil has treated players to plenty of new features. With cascading reels and colossal symbols, this slot is very exciting. The gem-hearted giants can transform into colossal 4×4 symbols for huge winning potential.

Jonas Strandman, Yggdrasil’s Gaming Head of Slots, says that Gem Rocks is made for players who love big wins. The game entices with win streaks, monster clusters, and potential bet wins of over 9000x.

The volatile slot has a huge audience in Canada. It started off as a must-try new game. Now, however, Gem Rocks has a large returning player base. This is due to the huge wins, beautiful visuals and exciting features on show.

Yggdrasil Gaming is best known for its impressive slots. Earlier this year, the software provider announced plans to move into table games.

Yggdrasil is developing many multi-player table games. Starting with blackjack, roulette and baccarat will follow. Yggdrasil claims that the new product will shake up the static table games market. This is through the combination of social interaction and high-end playability.

The iGaming developer has developed quite the following in Canada. So, Gem Rocks and future slots are expected to be a huge hit with audiences.

Check out all of the latest and greatest Yggdrasil games at the top-rated casinos in Canada. Get exclusive bonuses for Yggdrasil casinos like Mr Green, Dunder and Super Lenny.