Novomatic entered a licensing agreement with Miramax in September 2017. This agreement gives them the right to create casino games based on a cult classic film. That film is From Dusk Till Dawn. Released in 1996, the black comedy action horror is still much loved. It stars George Clooney, Salma Hayek, Harvey Keitel, Quentin Tarantino and Juliette Lewis. It also stars cult legend Danny Trejo.

GreenTube, of Novomatic Interactive, has finally released the news fans have been waiting for. The new slot game From Dusk Till Dawn is now available. The online slot game boasts the characters from the original movie. It is also loaded with features to entertain slot fans who haven’t seen the cult classic.

A game for fans and all slot players 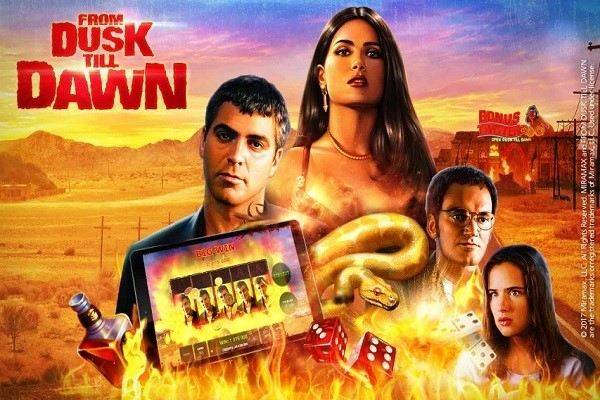 From Dusk Till Dawn obviously appeals to fans of the Tarantino film. It brings back the Gecko brothers in an action-packed game. They’re on the run again, with features that enhance the feeling of adventure. But even those who don’t get a nostalgia kick will enjoy the slot game.

GreenTube’s newest slot takes place on five reels and four rows. Players spin in famous characters and images from the film across 50 paylines. Most slots require three or more symbols on a payline for a win. However, From Dusk Till Dawn sometimes rewards for a minimum combination of two matching symbols. This game also has a wild and a scatter symbol. Available to GreenTube casinos in Canada like Kaboo, it appeals to all gamers.

The game boasts many features, bonuses and mini-games. The Dancing Bonus positions the wild symbol along the middle three reels for each bonus spin. On top of this, the wild can change size to cover between two and 12 symbols.

The Mugshot Bonus may be the most exciting feature. Players get three free games across 15 independently spinning reels. Wins come in when Seth (Clooney) or Richie (Tarantino) appear on the reels. There’s also the chance to win further free spins.

Mini-games can also appear randomly during the main game. The On The Run Bonus turns symbols wild. The Everybody Be Cool Bonus turns all characters symbols into Seth symbols. The Cash Explosion Bonus multiplies wins from between 5x and 25x the bet. Randomly triggered mini-games like these have proven to be popular in Canada.

For From Dusk Till Dawn fans, it has been well-worth the nine-month wait. Those in Canada who didn’t know about the game but like slots will also enjoy it.

Get yourself some free spins at Canada-favourite GreenTube casino Casumo today!