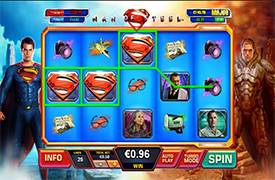 Playtech has an offer you mustn’t refuse – a casino cash giveaway worth £500,000! The giveaway is the part of the activities aimed at celebrating the launch of new 2017 titles and with it, the company continues its successful promotions.

The Biggest Offer Ever

The offer will be valid for 28 days and will surely attract many players, since it is the largest one Playtech ever offered.

When compared to the last year’s offer – launched to promote the arrival of new DC video slot titles – the latest one is twice the size.

This one is dedicated to one of the most famous heroes of DC universe, the man from planet Krypton, who will star in the several new Playtech titles, which include Superman (1978), Superman II (1980) and Man of Steel (2013).

A Total of Four Draws

The cash giveaway consists of four different draws, with the first one worth $200,000, while three others bring £100,000 each. There are also other prizes available, although much smaller in size.

Just play any of your favourite Playtech title and for every £10 cash wager, you’ll receive a ticket to be used across a selection of games. Apart from the mentioned Superman games, these titles include Space Invaders, Halloween Fortune 2, Buffalo Blitz, Age of Gods, Green Lantern and Plenty O’Fortune.

Playtech’s Chief Operating Officer Shimon Akad said the company was delighted to announce their biggest promotion ever. He added the players would have the opportunity to enjoy in some of the most popular and best-performing games. Akad also thanked the company’s licensees for their support in the latest promotion.

The rumour is Playtech is making preparations for another unforgettable offer, which will be ready by the time the new football season starts.