Here’s Why You Have to Try Microgaming’s Forbidden Throne 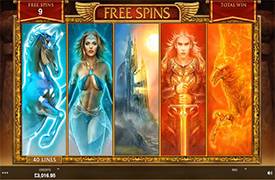 The Isle of Man-based online casino developer and provider, Microgaming, had a very busy month this May, launching four new titles.

The new releases attracted lots of attention, since Microgaming is famous for the quality of its games, and the new slots were well received among the players around the world.

If you haven’t already played Candy Dreams, Fortune Girl, Goldwin’s Fairies or Forbidden Throne, be sure to check them out as soon as possible, but today we’re going to talk about a release that seems to have caught the most attention, an epic fantasy adventure called Forbidden Throne.

Forbidden Throne is a five-reel video slot with 40 paylines, offering plenty of action and lots of opportunities to win hefty payouts since it’s a medium variance game with an RTP of 96.01%.

Before you even choose your wager, you’ll be drawn by its excellent soundtrack, fit for an action-packed adventure such as this one, and crisp graphics with beautiful background scenery.

Low-value symbols include gems, spell book, amulet, crowns and helmets, which are perfectly in accordance with the theme of the game, while the top-paying ones appear as Stacked Wilds and include a phoenix, unicorn, a castle, the elf king and the ice queen.

The Game Logo Wild will substitute for all other symbols except the Scatter, which is responsible for triggering the game’s Free Spins feature.

One or more Wild reels will appear on every spin, during the Main Game and Free Spins, increasing your chances of winning lucrative payouts.

As mentioned earlier, the Scatter triggers the Free Spins feature, which is activated when at least three of them land anywhere on the reels. Depending on the number of landed Scatters, the player will receive between 10 and 30 free spins.

It’s definitely worth mentioning that this feature can be retriggered indefinitely.

So, if you’re looking for an exciting game that also offers the chance to grab serious cash, then Forbidden Throne will surely be your cup of tea.