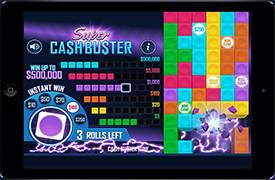 The company also announced the title would soon be launched in Canada, after signing a deal with the provincial lottery crown corporation, Montreal-headquartered Loto-Quebec.

Instant Win Gaming Limited boasts an impressive portfolio of over 250 games available in flash, HTML5 mobile and HTML5 desktop, while the company’s first physical release will be based on one of its popular titles – Cash Buster.

Rhydian Fisher, Instant Win Gaming Limited Chief Executive Officer, said in a statement that the launch of the first real-world game was a groundbreaking moment for the entire sector.

He emphasized the success of Cash Buster for Loto-Quebec and the fact that never before had a digital game been turned into a physical ticket. Fisher added this popularity was the main reason to create a physical version of the popular title.

Clement Aubin, Loto-Quebec Online Product Team Manager said the popularity of Cash Buster had motivated the company to offer the game to its retail players. He commended the relationship with Instant Win Gaming Limited and added he was sure the new title would be as big a hit in the physical world as it had been online.

Be sure to try your luck, but don’t forget the shops will be closed on Canada Day, so you’ll have to wait a bit until you can get your hands on Cash Buster.