Leander will release the four PearFiction Studios games later this year. It isn’t the biggest deal in the world. However, players of Canada are excited to try out games that have been forged in their home country. This exclusive deal will only better Leander’s standing in the ever-growing Canadian market.

Four fantastic games are coming to Leander from PearFiction. Gustavo El Luchador and Outerspace Invaders will come to the Leander platform. Also to be released is Fish N Chips and Pugs Life. PearFiction games often feature a humorous story and lovable characters. The Canada-based games studio focuses on bringing players an enjoyable and rewarding experience.

For example, in Outerspace Invaders you do battle with the big green alien Zerk. By “do battle” we mean spin in weapons and blast Zerk with them! As seen in the video below, Outerspace Invaders focuses on bringing the fun of retro games to the slot genre.

There’s also Gustavo El Luchador. In this slot game, you play as the wannabe wrestler Gustavo. As you progress, you take on bigger and better wrestlers, winning along the way.

These games are set to be are set to become immensely popular across the Leander platform. Right now, the top Leander online casinos in Canada include Guts, Miami Dice, and Grand Ivy. They are set to be treated to these four Canadian games later this year. 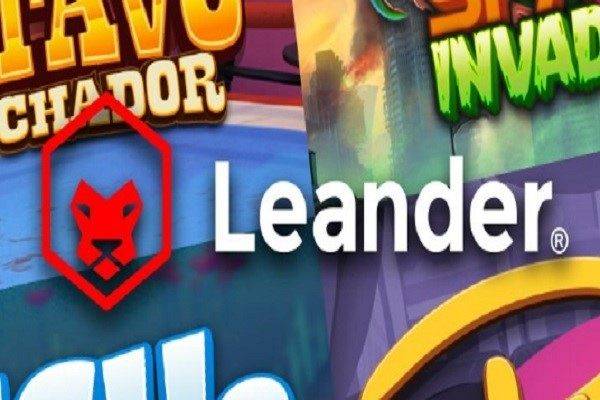 PearFiction isn’t the first gaming company that Leander has made a deal with during 2018. In early February, a new agreement with Gaming Realms came to light.

The deal with Gaming Realms added more real money games to the Leander platform. These games come under the Slingo Originals umbrella, including Slingo Riches and Extreme Games. Rainbow Riches Slingo is distributed to Leander Games customers too.

Leander Games is expanding its offering. But, best of all for the players of Canada, we’ll get to indulge in some Canada-made games. PearFiction makes fun games which online casino fans in Canada are sure to enjoy.

For a nice big bonus at the top Leander Games casinos in Canada, try out Dunder Casino and Mr Green today!