Home ❯ News ❯ LeoVegas Is the New Sponsor of Gold After Dark

LeoVegas Is the New Sponsor of Gold After Dark 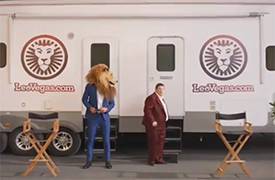 The Sweden-based gaming company LeoVegas will promote the brand in the United Kingdom with the help of its brand ambassadors Johnny Vegas and Leo the Lion.

As a part of this campaign, the company founded in 2011 will sponsor the late night program on UKTV Gold – Gold After Dark – with ads featuring brand’s duo.

The Gold Channel is a part of UKTV, a multi-channel broadcaster owned by BBC Worldwide and Scripps Network and is one of the UK’s largest TV companies.

The sponsorship deal, which started on April 8, will run for a whole year and will include 10-second ads and program spots on such shows as The Mighty Boosh, Black Books, Spaced, alongside other comedy shows.

This was a logical step after the company announced the new advert campaign last month, starring actor and comedian, Johnny Vegas and company’s mascot, Leo the Lion, with each of them presenting different games during the campaign.

Jon Sinclair, Leo Vegas’ UK Country Manager said the company was excited to announce the new partnership with one of the Britain’s most popular comedy television stations. As he stated, the ultimate goal would be the further expansion into the market and making LeoVegas a well-known and instantly recognizable name in the world of gaming.

The executive creative director of the Now advertising agency, Remco Graham claimed the Vegas duo would be a smashing hit. Graham also added the campaign was fitted for Johnny whose appearance would contribute to its greater impact.

As mentioned, LeoVegas was founded six years ago and quickly established itself as one of the leading names in the online gambling business. Today, the company operates in a number of competitive markets around the globe. LeoVegas has received many of the industry’s most valuable awards during the past years with the latest one being “Online Casino Operator of the Year”, received in February.