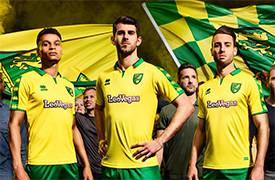 LeoVegas, a Swedish-based mobile gaming company and provider of online casino and sports betting services, is primarily focused on customers on the European market, but nevertheless, the company has a substantial fan base on other continents.

One of the markets where LeoVegas enjoys huge popularity is Canada. Canadian players, both penny punters and high rollers, often choose LeoVegas’ releases because of their innovative design, extremely entertaining gameplay and rewarding payouts.

LeoVegas is also appreciated because of its powerful platform and a broad offer of casino games.

The company has just announced it continued the expansion on the UK market. The latest move is the signing of a Principal Partnership with the English Championship side, Norwich City FC.

LeoVegas has signed a three-years sponsorship deal with the Canaries, and as a part of it, the brand logos and signs will be displayed on Norwich City’s shirts and kits. Apart from that, LeoVegas ads will be positioned in a prominent position on Carrow Road Stadium, the club’s home ground with the capacity of 28.000.

Managing Director of Norwich City, Steve Stone said the club was delighted with the latest deal, which would make such an established gaming venue a part of its team. Stone is convinced LeoVegas will make an important contribution to the club commercially. He concluded by saying he was looking forward to working with LeoVegas for the next three seasons.

This is the second football team LeoVegas has signed a marketing deal in a week. The first-ever football sponsorship agreement was signed with another Championship side, London-based Brentford FC.