Home ❯ News ❯ Lost His Home to Fire, Won a Condo and a Car

Lost His Home to Fire, Won a Condo and a Car 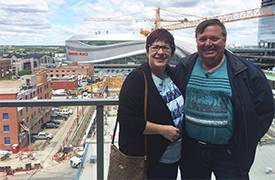 Fort McMurray resident, Michael Marchand, was devastated when he lost his home in the fire that swept through this Alberta town in May 2016.

The wildfire spread across approximately 1,500,000 acres, destroying more than 2,600 building and forcing 88,000 people to evacuate their homes.

The fire caused the largest wildfire evacuation in the history of Alberta. The scale of the fire was such that personnel from the Canadian Forces, Royal Canadian Mounted Police, as well as firefighters from Alberta, other Canadian provincial agencies, and even South Africa took part in extinguishing the fire.

Marchand was among those whose homes were destroyed in the fire, but little did he know that Lady Fortune planned an unbelievable plot twist.

Only a year after he was left homeless, this Albertan won a luxury apartment and an expensive sports car in a fundraising lottery he purchased at a hospital in Edmonton.

Marchand was out shopping for flowers when he received the call from a representative of the Full House Lottery.

You can imagine his reaction when he was told he had just won a fantastic prize, which consisted of a condo in Edmonton, overlooking the Rogers Place Arena, opened last year and a hot Italian four-wheeler – Maserati GranTurismo MC.

The lottery company posted the video of Marchand being told he was the lucky winner. He couldn’t believe his change of luck and went on to explain what had happened to him only a year before.

This was the richest Early Bird prize ever, worth staggering $656,837.

Edmonton-based Full House Lottery is known for giving away rich grand prizes, which include homes, vehicles, trips and other prizes worth more than $5 million.

There are many ways to try your luck. You can always visit Online Casinos Canada and find a game that suits your needs.