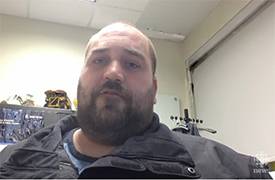 It seemed his story wouldn’t have a happy ending, but fortune thought otherwise. What a plot twist that was!

From Pain to Happiness

Let’s start from the beginning. A year ago, the fire named The Beast swept through the town, causing the largest wildfire evacuation in the history of the Canadian province of Alberta. The situation was so severe, it required the attention of the Canadian military, Royal Canadian Mounted Police, and firefighting forces from Alberta, other provinces and even South Africa.

Around 88,000 people fled their homes and 2,600 building were destroyed, while the damage was $9.5 billion. Unfortunately, Flett’s home was destroyed in the fire.

But the universe had a different scenario for the 34-year old man because some six months later, something truly unbelievable happened – he won more than $400,000 in the Mighty Millions Lottery 50/50 jackpot!

Flett later said he couldn’t believe what had happened, especially since only half a year prior to that, he had lost his home.

The first thing he did after winning the staggering jackpot was to rebuild his home. But he proved he had a big heart by helping out his family members – his mother and his younger brother who experienced some problems with their insurance.

The rebuilding of his home in Beacon Hill, a part of that where 70% of homes were destroyed, is in progress and it will be completed by July.

But that’s not all. Flett has given around $40,000 to various charities aimed at helping those who lost homes in the fire and plans to donate more money in the future.

He’s been closely working with Teen Time of Edmonton, the charity organization that took in many displaced from Fort McMurray, including himself and his family.