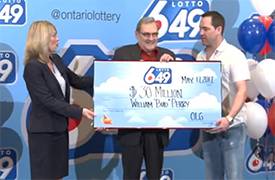 77-year old William’Bud’ Perry couldn’t believe his luck when he discovered he had won a staggering $30 million lotto jackpot.

The Lotto 6/49 draw was held on May 10, but Bud had to take the ticket to the store to make sure he was really the lucky winner.

He later said the retailer had been as equally surprised. He claimed his money on Wednesday, at the Pantages Hotel in Toronto and that was the moment he was finally sure he had become a millionaire.

Perry spent his working career as a crane operator, working on various construction sites around the country. Since he retired, he found a new past time activity, and this hobby had given him a clear idea what to do with his winnings.

Bud is a passionate golf player and winning a $30 million jackpot makes it very easy to play on some of the best courses in Canada. He said he wanted to play on all the top courses in each and every province and territory, accompanied by his friends.

Apart from this tour, Perry, who is also an inventor, wants to use the money he won to further develop his numerous prototypes.

But, the most important item on the list of plans includes taking care of his family.

Perry said his family meant everything to him and he expressed the desire to financially secure his children and grandchildren.

He also pointed out the fact his family had remained by his side even after he had lost nearly all of his money back in 1983.

After this fiasco, he spent almost three months living on a welfare. He said he was happy that he had the chance to give them something in return.