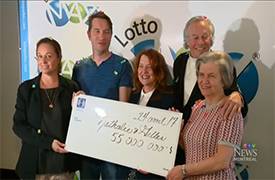 A lucky couple from Montreal won a staggering $55 million Lotto Max jackpot, but even more interesting is a story of how they found out they became millionaires.

When Nathalie Langlais first checked the lotto tickets on her electronic device, on Saturday morning – the day after the lotto draw – she was convinced she and her partner had won $55. When three zeros appeared, she was ecstatic but also confused, since the prize of $55,000 didn’t exist in the Lotto Max.

Finally, three more zeros appeared. We can’t imagine her reaction when she realized they’ve just won $55 million, but we guess her heart skipped a beat. Langlais later told she had been completely confused when checking the tickets.

According to her own words, the music was playing in the background, the same lovely tune that could be heard for smaller amounts, such as $17 or $22. That led her to believe they had won one of the smaller prizes, and she had absolutely no idea that there even was a possibility the jackpot was in play.

Her significant other, Gilles Rosnen, was upstairs and she quickly ran to see him, telling him she was flipping out (these are her exact words). Well, who can blame her? How often do you win $55 million?

Their first reaction was to hide the winning ticket, which they did, safely tucking it away in their daughter’s toy box. There it was until they went to Loto-Quebec headquarters to collect their winnings.

The couple said they wouldn’t quit their current jobs, at least not yet. For now, their plans include traveling and helping out their family.

The lucky Montrealers said the had been buying tickets at the same store for years.