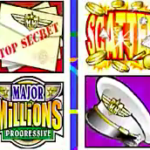 Major Millions has done it again. The wildly popular progressive slot — known for its amazing gameplay and propensity for regularly minting millionaires — recently paid homage to its name once again by paying out an incredible $1,215,341.

The player on the receiving end of this life changing jackpot has chosen to stay anonymous. It’s currently unclear whether that’s because they don’t want the publicity this type of score can bring, or because they still haven’t caught their breath enough to speak to anyone.

Major Millions was developed by Microgaming, an online slots and progressives developer that is certainly known for creating games that love to payout. That said, Millions has certainly lived up to that reputation even more than usual. This million dollar payday is not only the fifth largest ever for the game, but also the 61st in its history.

The game is so prolific that the use of the plural “millions” couldn’t be closer to the truth — just this May a player was awarded close to $2m. With such a huge winning potential, you almost have to wonder if this player will be upset at the thought of only getting a single million from the game.

It has truly been an amazing year for online slots players in Canada and around the world. We’ve seen incredible payouts happen nearly every week, if not multiple times per week. If nothing else, this latest big win on Major Millions shows that as we approach the end of the year holiday season, progressives aren’t letting up.

If anything, they are just warming up. Now that the sprint to the finish line for 2017 is underway, Canadian players should make sure to head over to their favorite machines and cash in on what is sure to be an epic and lucrative finish to an already epic and lucrative year.