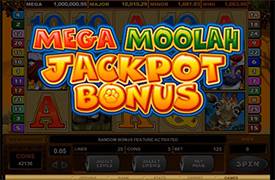 If you want to become a millionaire, Microgaming has the right tool for you apparently, since its 2006 release Mega Moolah is ‘responsible’ for a few of them.

The latest in line of Mega Moolah millionaires won the fantastic C$9.7 million jackpot, playing this game at Zodiac Casino, on his mobile device.

This title is without a doubt the most popular slot created by Microgaming’s developers and has an iconic status among the slot players worldwide. Launched in December 2006, the game created the first millionaire in April of 2008.

The ‘Pandora box’ has been open since, with new skyrocket jackpots being paid out every couple of months.

This five-reel video slot with 25 paylines has a progressive jackpot, collected from the entire network of Microgaming casinos, which is the main reason it gives such staggering payouts.

Mega Moolah has found its way into The Guinness Book of World Records, when John Heywood, a former British soldier, won a life-changing jackpot of nearly C$29 million. This happened in October 2015, remaining the biggest jackpot ever won online.

It seems you should take up on those casino promotions because it can prove very lucrative. That’s what our unnamed winner did, never risking a single cent of his own money. A dream come true scenario, the payout of a lifetime.

So remember to look up Mega Moolah at the nearest casino, and who knows, you might end up as the star of a similar news article. One thing is sure – Mega Moolah jackpot has already reached C$6 million and keeps on rising. We’re sure another life will be changed in the near future.