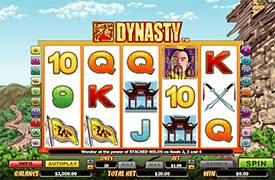 Both Casino Cruise and Spinit have great news for their customers, since this month will bring plenty of new entertaining releases from some of the leading game developers.

The first of several new premieres debuted on March 15. It is an Orient-themed title, developed by Microgaming, called Ming Dynasty. The name itself suggests the game is set during the rule of China’s most famous imperial dynasty, regarded by many to be one of the greatest in human history.

A Journey Back in Time

The game will take you couple of hundreds of years back in time, with the overall look and feel (background scenery, soundtrack, symbol design) being very familiar to all those acquainted with Chinese culture.

Both low-value and top-paying symbols are inspired by Chinese motifs, with at least three of a kind landed to activate payouts. But, the symbols you’ll want to see more on the reels are definitely the Ming Dynasty Wild and the Bonus Scatter symbols.

As usual, the Ming Dynasty Wild substitutes for all other symbols, except the Scatter, and during the game it will appear only on reels 2, 3, 4 and 5.

Land a minimum of three Scatters to trigger the Free Spins game. Depending on the number of landed Scatters, you’ll be awarded 10, 15 or 25 spins. Before you start spinning, pick one of the tiles to reveal the Any Way symbol, and during the spins, every combination featuring this symbol will pay. With at least three Scatters retrigger the feature and win even more.

There is a stack of mystery positions on each reel, which during a spin can be replaced by any of game’s symbol, except the Wild and the Scatter. This is the Mystery feature, another ally in your quest to win hefty rewards.

So be sure to check out Ming Dynasty on Casino Cruise and Spinit, or play one of many titles available.