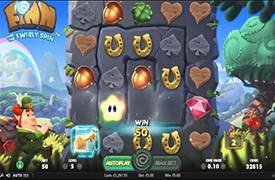 The Swedish based gaming provider NetEnt has announced that the release of the brand-new slot machine Finn and the Swirly Spin is scheduled for November.

As stated in many reports, the new five-reel video slot will capture the hearts of many players with plenty of rewarding bonus features, such as four different kinds of free spins, a random feature with four variations, designed in such a way to substantially boost gamers’ winning power.

The new NetEnt’s title will bring many innovations, including a swirl mechanics on the paylines feature. Finn and the Swirly Spin is inspired by the Luck of the Irish, and the reels themselves are set against the theme-related objects, including rainbows, shamrocks, golden acorns, horseshoes, to name just a few.

The big draw of the slot machine is also Starfall Wild icon, which is key to triggering the Star Bar Free Spins bonus round that can award up to seven free spins. The Dragon Destroy feature, on the other hand, activates the Lava Lair, granting three free spins, whereas the Irish Luck unlocks the Lucky Mug that can provide punters with four free spins. Finally, Magic Transform is essential for triggering the Golden Pot feature that awards two free spins.

As the name of the slot suggests, the symbols in Finn and the Swirly Spin have a spiral design that begins at the outer corner and ends in its central point. The game boasts magnificent graphics and immersive Celtic soundtrack, which will easily lure punters into play. The traditional tune changes as players trigger numerous Bonus features that the NetEnt’s release is equipped with.

NetEnt has been a leading supplier of premium games and gaming solutions for the past 20 years and they collaborate with the world’s most renowned casino operators. Some of their famous slot titles inlcude Dracula, Starburst, the Invisible Man and many more.

Their wide range of products is powered by cutting-edge platform and their developers are real experts when it comes to delivering flexible casino solutions which meet the needs of the majority of players.