NetEnt has long been a favourite games provider at online casinos in Canada. In fact, it tends to be a favourite in all countries it is active. NetEnt already has many great games on the virtual shelves. Asgardian Stones is another great title under the NetEnt banner.

Asgardian Stones went live at all of the best NetEnt casinos in Canada not long ago. Players have swarmed to Asgardian Stones because it’s new. But they have stuck around for the exciting features. Because it’s Norse mythology-themed, the slot was always going to be popular. One of NetEnt’s most popular slots is the progressive Hall of Gods.

Asgardian Stones has many exciting features and is the first of many great games set for release. 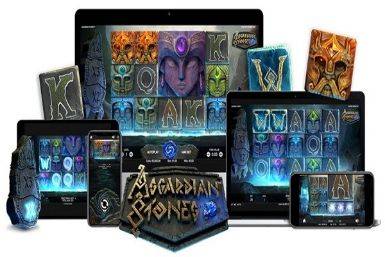 Asgardian Stones is set up as your usual five-reel, 20 payline slot game. Diving into Norse Mythology, players aim to enter the enchanted world set beyond the stones. The Colossal Crush feature is an industry first. The feature makes the stone symbols crush the ones beneath. Then, the energy from the destroyed symbol is released and adds to the win multiplier.

The new NetEnt game has many other special features. Asgardian Stones boasts a wild symbol, Avalanche Feature, Colossal Symbols, free spins and a bonus wheel feature. Slot games are very popular in Canada. This new rendition of the slot game has already proven to be a big hit.

The game boasts an atmospheric soundtrack that immerses the player. With so many great features and an iconic look, Asgardian Stones has, naturally, become very popular.

Continuing a strong start to 2018

NetEnt has experienced a great start to 2018. The software providers started with a huge win at the Global Gaming Awards. At the London, England event, NetEnt won the Online Casino Supplier of the Year award. They trumped Yggdrasil, Playtech, and Betsoft to win the award.

But, there’s even more great gaming in line from NetEnt that’s already in the works. NetEnt has three exciting slot games already announced. Hotline, Jumanji video slot, and Witchcraft Academy are all on the way. The Jumanji video slot will be based on the much-loved film from 1995.

Check out Asgardian Stones at our top-rated NetEnt casinos in Canada, with exclusive bonuses available at LeoVegas and BGO.