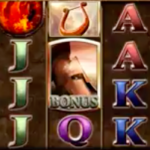 When Canadian online slot players think of the Roman empire, they envisage towering architecture, huge military victories, and a world empire awash in incredible amounts of gold, precious gems, and other riches:

Now, the new Apollo God of the Sun slot from leading and trusted online slot developer Leander Games is promising to bring all that excitement — and cash — to players in the form of a new progressive slot.

Apollo God of the Sun is designed to be a classic slot with 5 reels and 20 paylines of action. In addition, with minimum and maximum bets ranging from as little as $.20 to as high as $200, this is a progressive jackpot designed for both commoner and royalty alike.

The praise for the graphics, sounds, and overall experience is already being praised. There is a true “Roman” feel to the slot, with a background full of towering columns set against the world-famous “Roman road” leading off into the distance — and unknown adventure.

While Apollo God of the Sun is being widely praised, there is another fact being noted in the only casino community. That’s the continuing ability of Leander Games to create slot machines on par with other, larger and more well-known developers.  Other games from the Leander team include Zombie Rush, The Voyages of Sinbad, and even one game simply titled “Gold.”

Leander has also been mentioned in the discussion for numerous industry awards for their work, including at the prestigious EGR B2B industry conference. With this latest awesome title now being added to its collection, there’s little doubt that we will see a lot more from the developer in the future.