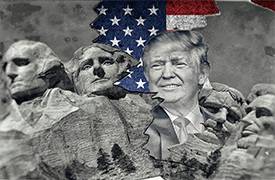 Loto-Quebec, the Crown corporation of the Canada’s second largest province, will no longer accept betting on Donald Trump’s future as the 45th president of the United States of America.

Such a decision was made by Quebec’s Finance Minister after the provincial government of Philippe Couillard officially asked Loto-Quebec to do so.

No More Betting on Politics

The spokesperson of the Montreal-headquartered company, Patrice Lavoie, said that Loto-Quebec understood that the subject could hurt feelings, although the bet itself was within the bounds of good taste.

Lavoie later added that the majority of those who had made a bet on this question had favored Trump remaining in office.

He added that the Crown corporation will not allow betting in Canadian, provincial or municipal politics in the future.

But it seems the whole affair with wagering on the future of the current US president, could have been done differently since the betting campaign was canceled only a day after it was launched.

The day before the cancellation of the deal, Loto-Quebec invited their customers to bet on whether Trump would remain in the White House after May 1, 2018.

‘Loto-Trump’ is no longer available for players, although it attracted lots of attention.

The Loto-Quebec gaming website offered 3/1 odds that Trump would still be the US president after May Day, while all those who wagered that Donald was going to be kicked out of the White House, could have earned 3.65$ for a $1 bet.

According to Loto-Quebec, all bets are going to be reimbursed.

This wasn’t Loto-Quebec’s first bet of this kind since the company offered betting on the outcome of the last year’s presidential election in the United States, which was Loto-Quebec’s most popular non-sports bet ever.