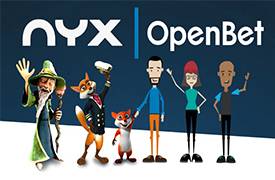 NYX Gaming Group’s OpenBet sports betting platform is proving to be a real hit, and the full potential of it was seen at this year’s Grand National Festival, held at Aintree Racecourse in Liverpool, England.

Las Vegas-based operator has enjoyed a huge success during the famous horse race that dates back to the 1830s, smashing their previous record, set only a month ago during the Cheltenham Festival.

During the 2017 edition of the Gloucestershire event, NYX Gaming Group handled over 225 million of transactions, with staggering 37,000 bets per minute. Little did they know this record would soon be broken.

Another Festival, Another Record

Liverpool’s Grand National is a one-day event, but NYX Gaming Group was up to the task of setting yet another record.

On April 8, when the race was held, NYX Gaming Group processed around 74 million bets or 68,000 bets per minute on average. OpenBet platform took advantage of the fact that over ¾ of all bets were made via mobile devices, making it quite clear that developing a stable online platform is something any serious name in the business must put on the top of its list.

Matt Davey, Group’s Chief Executive Officer said they had taken the Grand National very serious, with months of preparations in order the make the most of the single-day event. He added that everyone was aware of the importance the Grand Festival had for the Group’s UK customers, so main focus was to offer the highest quality of service.

Davey stated he was proud of the power the OpenBet platform had shown, with 68,000 bets per minute being a fantastic result.

Founded in 1999 and based in Las Vegas, Nevada, NYC Gaming Group today offers a complete range of industry-leading products and different gaming solutions, with more than 200 clients, 1,000 employees and an extensive portfolio of over 2,000 games.