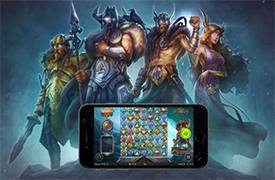 The Swedish gaming specialist and one of the leading mobile casino gaming developers Play’n GO announced its latest release, based on Norse mythology, which promises a lot adventure and lucrative rewards.

Viking Runecraft features 7×7 grid, which is a Play’N GO premiere, while the game itself prides on its high-quality visuals, but all those familiar with the works of the Swedish developer are used to it.

The symbols on the reels match the game’s theme and include five of low value – runes, axe, hammer, and not one but four Wilds, featuring some of the most respected Gods and Goddesses of the Norse Pantheon – Thor, Odin, Freya and Heimdall.

The game offers the opportunity to advance up to the next level, with the final goal being the level of Gods. After a level is completed, on the four Gods will activate a feature, increasing the player’s reward.

The fun doesn’t stop here since the game has many other exciting features in hand. There are four Charge of Destruction features waiting (Fury of Fenrir, Judgement of Jormungand, Scorching of Surt, Lure of Loki), along with Ragnarok feature, which can get up to x15 multiplier on your winnings.

Viking Runecraft is a high volatility game, which means it can give extremely rewarding payouts. So if you’re looking for a big win, be sure to check it out as soon as possible.