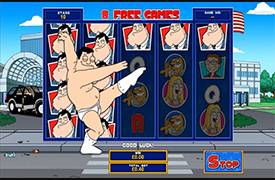 The Smiths are coming to a video slot near you in the latest release by Playtech.

Of course, we are talking about one of the most popular animated sitcoms which is currently aired on TBS, American Dad.

The fans of the show will find the look and soundtrack very familiar since slot simply copied them. Nothing unusual, since this is a common practice when it comes to officially licensed titles.

Head to Langley Falls and you’ll definitely enjoy this title featuring top-notch graphics, lucrative games and all of your favorite characters from the show.

The five-reel video slot with 40 paylines has an RTP of 96.1% and low volatility, which means you’ll often win, but you won’t win big. However, the vast number of bonus features will be entertaining and rewarding enough to keep you playing for hours.

Roger the alien is the Wild, substituting for other symbols. The Wild combinations can go up as much as 750x in value while activating Roger’s Random Wilds feature will reward you with up to 10 random Wilds. The Wheels and the Legman feature bring a chance for huge payouts, with a trail of Wilds on every feature spin.

The Schmooblydong Wheel can appear only on reels 1, 3 and 5 and when landed it will trigger free spins and bonus games.

Landing on reels 1 and 3, the Schmooblydong Wheel triggers the American Dad bonus games, with each game being unique and offering random wilds, stacked symbols and much more. If another Wheel lands on reel 5, the player will be awarded up to 25 complimentary spins.

Fendo said he was sure American Dad would stand out in the market, offering players high-quality entertainment and a chance to win extremely rewarding prizes.