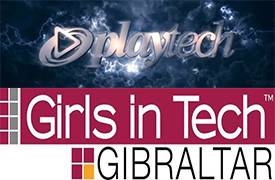 Girls in Tech, a global organization focused on the empowerment of women in technology, has signed an important sponsorship deal with one the biggest names in the online gambling industry, the Isle of Man-based software provider Playtech.

With the aid of Playtech’s resources, Girls in Tech will expand its presence in Gibraltar, which is known as one of the major global tech hubs, with a large role in public and private sectors.

According to Playtech, the company decided to join the movement in order to promote diversity and inclusion in the gaming industry.

The managing director of Girls in Tech Gibraltar branch, Cristian Turbatu said the organization would deliver a successful and motivational platform to encourage women not only to enter but above all to succeed in the fields of science, technology, engineering and mathematics.

The organization will continue to do what it does best – to provide project aimed at raising awareness of the gender-related prejudice, which is still widespread in the society and to provide means of eliminating it.

Playtech employs over 5,000 people in 17 locations worldwide, and as such is a huge promoter of diversity and inclusion. According to Shimon Akad, Playtech’s Chief Operating Officer, diversity is what makes the company strong and contributes to its global position in the industry.

Akad said projects like these helped Playtech to become a successful and socially responsible company and expressed his excitement to partner with Girls in Tech on spreading the message of equality across the entire gaming industry.

San Francisco-headquartered Girls in Tech have ambitious plans for 2017, the year in which the organization celebrates its 10th anniversary. The plans include a series of events and other activities to promote the goals and ideas of the organization.