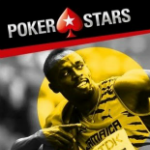 The ZOOM format — which allows players to instantly discard poor hole cards and receive a new hand — is one of the most popular forms of poker on the internet due to the speed at which it plays:

Now, ZOOM promises to become even faster with the addition of Usain Bolt branded ZOOM games to the PokerStars client.

In addition to the regular poker action offered by the traditional ZOOM format, there are also additional features to the Usain Bolt version that will up the adrenaline of players.

The game fully embraces the mythology of the man who is widely considered to be the hands-down faster human to have ever walked the earth. There are a number of side-games, puzzles, and other features that allow players to experience Bolt’s legendary speed on the Athletics track in their poker game.

Industry insiders have also been keen to point out the larger business implications of choosing to spend the amount of money it must have taken to get Bolt onboard.

No one can deny that a branded partnership with Usain Bolt will bring a lot of fun to PokerStars’ already popular ZOOM game. However, at the same it’s also another clear indication that the Canadian owned Stars Group — PokerStars’ parent company — continues to place a strong emphasis on investment in experiences geared towards purely recreational players.

It remains unknown how long the partnership with the world’s fastest man will last, or what its impact will be. But if nothing else, it’s creating a lot of attention from investors and others in the online casino world.

If this sponsorship is a success, players can probably expect to see many more of their favorite sports heroes showing up at PokerStars’ tables in the near future.