Pragmatic Play Makes You the Star Striker in The Champions Game

Everyone’s catching World Cup fever. Despite Canada not being in the colossal tournament, sports fans are getting hyped for the event. With it taking place this summer, online casinos in Canada are getting into the spirit as well. Players in Canada will see many World Cup promotions popping up. As well as these, many World Cup games are about to become very popular.

One game which is set to get big in the coming weeks is The Champions. Created by Pragmatic Play, the brand new release appeals to all fans of the sport. With its 2018 World Cup features and unique gameplay, fans are falling in love with the new slot.

Making you the star player 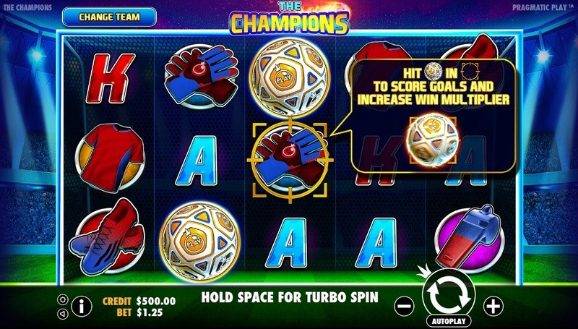 As players enter the field of The Champions, they are met with a choice. Players get to select to play as any team that made it to the 2018 World Cup. Play as France, Brazil, Germany, or even Panama. Then comes the slot game, which consists of three rows, five reels, and 25 paylines.

One of the most exciting new features is the Momentum Progressive Game. The player gets to select a place on the slot on every spin. If one of the Pragmatic Play balls lands there, a 2x multiplier is granted. That boost can grow to a 20x multiplier if more balls come in over a pool of ten spins.

Three bonus symbols take the player to the Penalty Shots Bonus Game. Here, the player selects one of four zones in the goal five times. Scoring one rewards 5x the bet. But, if the player scores all five, a massive 100x the bet is won.

The theme and the innovative gameplay has fans in Canada swarming the game already. When the World Cup arrives on June 14, The Champions will get even more popular.

It is one of two games released this month, with Great Rhino being the other. Great Rhino follows in the footsteps of another very popular Pragmatic Play game, Hot Safari.

Pragmatic Play’s profile in Canada continues to grow. With another great game out, their popularity will only continue to grow.

Play as the top striker with a welcome bonus at Mr Green today!