Known for their visually stunning video slots, Quickspin has so far been limiting its gaming portfolio to video slots with fixed payouts. The developer’s latest release, however, has broken the pattern and created a milestone – the new Oriental-styled, high variance Dragon Chase introduces 4 progressive jackpots, triggered by a special set of symbols.

With the new release, the expectations run high; Erik Gullstrand, CEO at Quickspin, expressed his confidence about the game’s future high ratings and reflected on the slot’s versatility.

“We are also proud to have been able to create two different versions of the game, so that the operators can choose which jackpot they want to participate, depending on their size, budget, and target demographic. Or, if they want to, they can also use both versions and target a wider range of players!”

Played on 5×3 reel grid across 20 fixed pay-lines, Dragon Chase is a visual delight with 4 jackpots that grow together with the players’ bets. The bets range from 0.20 to 100 and the return to the player percentage on an average session in 96.39%.

The symbols are paid left to right, in sequences of at least 3 matching icons, and the highest payouts (in the base game) are generated by the flaming Wild icon, Golden Lion, and Golden Frog.

The burning Wildfire icon appears both in the base game and during the free spins. Once it lands on the reels, it will remain on the grid, moving downwards and awarding a free-spin session when it covers a Scatter. 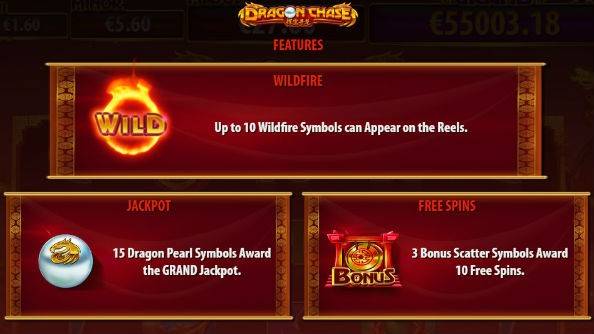 Free Spins can also be triggered when at least 2 or 3 Scatters form a combination, while Dragon Pearl Re-spin Feature is initiated by a minimum of 3 Jackpot Scatters. This will unlock 3 re-triggerable Re-spins, with additional rounds added every time a new Dragon Pearl icon lands on the reels.

Quickspin is an award-winning Swedish software developer founded in 2011 as a part of Playtech Group. Apart from Back Office solutions and Achievement Engine, the company offers a massive portfolio of games, often inspired by mythology and folk legends, which makes their releases quite unique.

Another commendable trait of Quickspin is their innovative spirit – the newest addition to the family, Graphic Artist Jonatan Wallén, is only 21, which speaks volume of the company’s business model based on creativity, imagination, and a fresh outlook.

Casumo – UKGC and MGA licensed casino that partners with over 40 suppliers, including Quickspin. Casumo’s welcome bonus is not the only incentive offered by the casino – the members will be rewarded every step of the way, though collectible Trophies and Valuables.

Leo Vegas – Multiple industry award winner, including Brand of the Year in 2018 (EGR Marketing and Innovation Awards) and Online Casino Operator of the Year in 2017 (International Gaming Awards). The operator is best known for their live dealer games (some of which are exclusive to Leo Vegas).