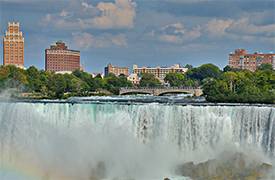 Saint Catharines, the largest city in Canada’s Niagara Region, has voiced its concerns over the latest plans of Ontario Lottery and Gaming Corporation to select new operator for Casino Niagara and Niagara Fallsview Casino Resort.

The authorities fear that the introduction of a new operator would lead to job losses and have a negative impact on the local economy.

The two casinos in the region, Casino Niagara and Niagara Fallsview Casino Resort, are currently managed by the Fall Management Group, which will be in charge of them until June 2019.

Ontario Lottery and Gaming Corporation began a new selection process to choose who would operate the two casinos after that period. At the same time, an official Request for Pre-Qualification was announced.

Many argued this was done without any sort of consultation with local community, and without any analysis of the possible effects it could have on the entire region.

Councilors from Niagara Falls and Saint Catherines are now determined to stop the selection process and restart it after a careful discussion on the whole matter is conducted. They stated the interests of the local community had to be taken into consideration with the main focus on keeping the existing jobs.

As said, the new initiative aims to keep the current and create new jobs in the region. It bears certain resemblance to objectives set in 1996, when the first casino was opened in Niagara Falls. According to Mike Britton, one of the counselors involved in the whole affair, the focus has to be on increasing revenues, creating new jobs, economic development and creating sustainable conditions for stable and long-term economic benefit.

As Britton stated, it seemed none of these objectives was among the plans. Considering the fact that these two casinos employ more than 4,000 people, it should have been at the top of the list.