Home ❯ News ❯ The Simpsons Are Taking Over the Slots

The Simpsons Are Taking Over the Slots 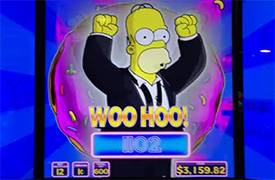 When Matt Groening introduced the Simpson family to the world back in 1989, no one could have imagined that this series would become so popular, not only in the United States but across the globe.

Today, you can hardly find a person on this planet that hasn’t seen at least one episode of this animated sitcom.

The feature-length film was released a decade ago, while the first video game based on the Simpsons was launched back in the nineties. Now, thanks to the creative minds of Scientific Games, a Las Vegas-based developer and provider of gambling products, we will have the opportunity to enjoy in The Simpsons slot machine.

The game itself was first shown in the Gamescape cabinet, featuring 40 inch top screen and a 10.4inch touchscreen, but most importantly, the game comes with innovative features such as symbol cloning and character re-spin.

Lots of Fun and Excitement

Apart from that, The Simpsons slot machine offers six bonus modes, with each of them featuring one of the show’s popular characters:

According to the game’s producers, we’re in for a lot of fun, entertaining and action-packed features and bonuses, while the huge screens will make the players feel like they’re walking down the streets of Springfield.

Scientific Games stated The Simpson slot would come with an integrated gesture control element, which would introduce motion sensor technology into the world of slot machines, and open a wide array of opportunities in the future.