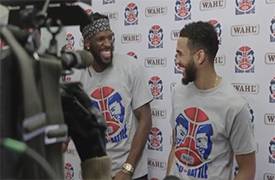 There is a strange superstition among basketball players, especially when their teams enter the playoffs.

When this happens, it’s not a rare sight to see some players start growing beards and simply refuse to shave until their teams either get eliminated or reach the finals and grab the title.

Wahl Canada is getting the most out of this situation, with its latest and wackiest fundraiser, called The Wahl Beard Battle.

The Goal of the Fundraiser

The main objective of this charity drive is to acquire funds for The Carroll Family Foundation (CFF). CFF is founded by NBA player DeMarre Carroll, and the Foundation is focused on preventives, diagnostics and treatments for those suffering from pediatric liver disease or disorders.

DeMarre Carroll himself, and his Toronto Raptors teammate, Cory Joseph, are the first Wahl Beard Battle participants and in next four weeks, they will attempt to raise as much money as possible for this noble cause.

They started growing their beards on April 10, and you can check out their progress on Wahl Canada Facebook page.

Fans will vote on their photos until May 8, when the player with the most votes will be crowned as the Wahl Beard Battle winner.

Every vote each of them receives means a $1 donation on behalf of Wahl Canada, with the goal set on $10,000. It’s as simple as that, so be sure to visit the Wahl Canada Facebook page and vote, because you can help someone just with a few mouse clicks.

The Canadian side entered the playoffs with the home court advantage after finishing the regular part of the season in the third place.

The first game of the series was played at the Air Canada Centre in Toronto on April 15, with Raptors losing 97-83 to Milwaukee Bucks.

The next game will also be played in Toronto, after which the battle for the Conference Semifinals will move to Wisconsin.