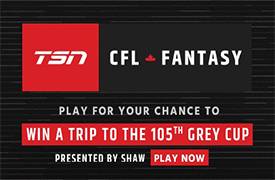 The Toronto-headquartered media company The Sports Network (TSN) has teamed up with the Canadian Football League (CFL) to offer a new fantasy sports service.

CFL is a professional sports league in Canada, representing the highest level of competition in American football. The league has a total of nine teams, located in nine cities and divided into two divisions: the East Division and the West Division.

Christina Lizt, CFL senior vice-president of marketing said CFL was delighted with the chance to offer the fans the opportunity to play fantasy sports.

Litz described fantasy sports as a challenging and an exciting product, adding it was easy and fun to use.

Nine Teams to Choose From

The new deal will add CFL’s nine teams to fantasy sports offer, while the players will be able to select six offensive players and a defense line from the league. An additional challenge is the salary cap that can not be exceeded.

The game is completely free to play, while the players will have the chance to win weekly and season prizes. The season champions will get a trip for two to the league finals, the Grey Cup, which will be held on November 26, 2017, at TD Place Stadium in Ottawa.

Ken Volden, TSN vice-president and executive producer, pointed out the established partnership between the two sides. He added TSN was excited to see the fans in the action and hoped there would be plenty of action during the season that was due to begin on June 22.

Volden said CFL Fantasy players would be able to easily share their rosters throughout the social networks thanks to the latest media integration, which was updated for the forthcoming season.

The 64th CFL season starts on June 22 and will end on November 4, while the playoffs kick off on November 12.

CFL fantasy sports is a great way to bring fans together, and a fun activity to enjoy during the upcoming Canada Day on July 1.