View Royal Casino is Getting a Complete Makeover 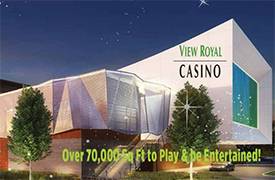 View Royal Casino is about to face a major expansion, which will more than double the size of this venue, located on the southern tip of Vancouver Island.

The new makeover will bring a complete change of this venue, with 600-seat entertainment facility, additional 350 slot machines and electronic games and an increase in a number of table games.

The expansion won’t be focused on casino grounds only, and it will include an opening of new dining facilities. The good news for all those who frequently visit Greater Victoria is the casino will not be closed during the expansion.

Construction has already started and is expected to be finished by mid-2018. After the work is completed, View Royal Casino will be 42,000 square feet larger than it is now.

The mayor of View Royal, David Screech, stated the local community will benefit from the casino expansion. He also added he expected the increase in income from the casino, which was around $1.8 million on a yearly basis. Screech said these funds were used for capital projects

View Royal Casino was opened in December 2001, introducing slot machines to Victoria for the first time. The casino is operated by the Great Canadian Gaming Corporation, with seven municipalities benefiting from the money earned.

View Royal and Langford receive the most, about 45% each, while the other 10 percent is equally distributed among the municipalities of Esquimalt, the Highlands, Sooke, Metchosin and Colwood. Last year, a total of $4.1 million was shared by the local communities.

British Columbia Lottery Corporation has plans to build a second casino in Victoria, but little is known about the project itself. The location is yet to be decided, as well as the possible service providers. The final decision, however, is on the local government.

If the authorities decide another casino is needed, it will be built as a part of a greater complex, since the local policy doesn’t allow casinos to be standalone projects.