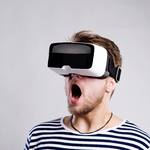 Canadian online casino players are already enamored with the immerse action that only online slots can bring. But now, SlotsMillion is taking the phrase “immersive experience” one step further and introducing actual virtual reality slots to their slots title offerings:

VR technology has arrived on the scene with a lot of hype. However, adoption has been slower than the industry would have liked, mostly due to the overwrought controls. It remains to be seen if VR slots will be able to buck that trend and become a hit with online casino players.

SlotsMillion has decided to make their lobby and select slots VR ready using the Oculus Rift headset. Oculus is owned by Facebook, and is considered to be the leader in the industry right now.

The titles available for VR play are some of the most popular amongst online casino players. This includes Starburst, Scarface, and Gonzo’s Quest. These games were not only chosen for their popularity, but also because their gameplay and graphics already dazzle players worldwide.

With some of the largest player followings of any online slots, their transition to VR is guaranteed to get more than a few curious players to at least give them a try.

The Future Is Now

It’s been a while since Microgaming was able to take down the Digital Innovation of the Year award by creating a viable VR Roulette title. Two years on, VR in online casino – like VR as a whole – hasn’t really caught on fully.

Much of that is certainly due to hardware limitations. However, players haven’t exactly been clamoring for VR titles, so adoption has suffered as well. It’s a classic chicken-or-the-egg scenario in terms of adoption following development or vice-versa.