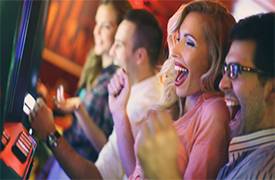 Casinos in Manitoba’s capital and the largest city Winnipeg are about to offer their customers a 100% ‘Made in Canada’ repertoire.

Club Regent Events Centre is the place to be in July, with the series of shows featuring Canadian artists.

A Bit of Music, a Bit of Comedy

The first in line is a rock band from Delta, British Columbia, called Theory of a Deadman, which will perform at Club Regent on July 7. Founded in 2001, the band achieved success outside of Canada, with five studio albums released so far and with the sixth one on its way later this year.

They received several awards for their work, including the Juno Awards in 2003, as the New Group of the Year, and the Western Canadian Music Awards in 2009.

July 27 is reserved for lots of laughter, with famous Canadian comedian, actor, television host and voice actor, Howie Mandel, hitting the stage at Club Regent. He is familiar as host of TV show Deal or No Deal and also as a judge on America’s Got Talent, where he replaced David Hasselhoff. He started his career in the late 1970s, and even received a star on the famous Hollywood Walk of Fame.

The ticket prices start at $30 and will be available for purchase on Ticketmaster, starting from Thursday.

No Sleep During the Weekend

But that’s not all what Winnipeg Casinos have to offer. Club Regent and McPhillips Station will be open all night during weekends. The experiment with the working hours became a huge success, with significant boost in attendance and income, so the step to make this a permanent decision was a logical move.

A representative of Manitoba Liquor and Lotteries stated the idea was received well not only by the customers, but also by the staff, since the longer working hours meant higher wages.