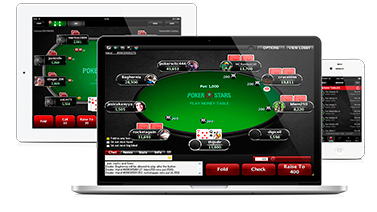 Among the many industries that have benefitted from the internet’s rise, few can rival the success top online poker sites have experienced. Gamblers love poker because, unlike most casino games, poker combines both luck and skill. Players can develop poker strategies and use their skills to win. In addition, poker has no house edge. Instead, practised skills can give players more than 50/50 odds at making real money.

So if you’re looking to be dealt in on a virtual game, have a look below to access some of the best online pokers Canada has to offer:

For those of you that already have played poker at a casino or with friends, online poker basically follows the same rules. With online poker games, the screen features a digital version of a table. Then, the game virtually replicates the poker experience that you have at an actual casino using computerized chips and cards. In the case of live dealer poker, you view a live video streaming the dealer from an actual table. Texas hold’em stands out as one of the most popular online poker games. In this version of the game, players have seven cards at their disposal — two face-down cards, or pocket cards, that only the player can see, and five face-up — or community — cards that everyone at the table can use to create their best 5-card hand. Players begin by receiving two face-down cards from the dealer, followed by a round of betting. The player to the left of the dealer is required to play a “small blind” — an ante that is half the minimum bet. The player to his or her left has to pitch in the “big blind,” which is equal to the minimum bet. Players then go around the table either calling the minimum bet, raising, or deciding to fold their cards.

The flop – Once the first round of betting finishes, the dealer lays three cards face-up on the table, known as the “flop”. The goal for players is to create the best 5-card hand possible using their down face-down cards and the face-up cards now on the table.

After the flop – After the flop there is another round of betting. Once that round is over, the dealer flips one more card face-up, and the players bet again. Once that betting round is complete, the dealer flips over a final face-up card, and the players have a final round of betting. Once that round is completed, the hand is over and all players have to reveal their face-down cards. The player with the best hand at this point wins all of the money bet throughout the entire hand, minus the “rake,” which is a small tax levied by the casino.

Familiarizing yourself with the various card combinations is a key part of forming a winning hand. Below is a list of all the 5-card poker hands, listed from lowest to highest to help with your online poker strategy:

Poker has its own language, which can seem confusing at the start. Understanding these terms plays a critical part of playing like a pro. However, like the game itself, once you get the hang of it, you’ll start winning in no time. Ante, chips, blinds, big blinds, stack, river, ace in the hole, check, raise, position bet, muck and more – they’ll be rolling off your tongue before you know it! First, let’s go over a few of the basics to get you started.

Ante – A stake put up by a player before the deal

Small blind – An ante that is half the minimum bet

Raise – The action by a player to increase the opening bet

For those of you who have never played poker or need a refresher course, we’ve got you covered with a basic online poker guide. Poker has many variations so in this case we will again refer to one of the most popular versions called Texas hold’em. No need to worry! With our online poker guide, you can learn the game in a few simple steps:

Online poker makes it easy and convenient to join in on a poker tournament or even play on your own. You don’t need to organize a group of people to play or drive to the casino. Gambling sites that feature online poker games allow you to instantly access poker tournaments and games right from your desktop or mobile browser with flash poker through your browser. That means, you can just sign into the gambling site, make a deposit, and begin playing right away. You may also have the option to download the site’s casino software to play on your computer or download the mobile app to play poker on the go from your smartphone or tablet device.

When playing online poker, you have the option between online poker free games and real money poker games. With online poker free games, you can play poker instantly without betting any of your money. In this case, you don’t win any money either. Free demo games give you a great opportunity to learn the game better and develop strategy before betting real money. What could be better than winning real money playing an entertaining game like poker online? If you want the chance to win real money, then you will first need to make a deposit at the casino. You may also have the opportunity to play online poker real money games using a no deposit bonus that casinos give to new players just for signing up. That means you can use casino credits toward betting rather than risking your own money. Our site lists the best no deposit bonuses that you can use toward online poker real money games so make sure to keep an eye out for those. Otherwise, you need to make a deposit at the casino. Then, the casino will automatically credit your account with money that you can use to place bets. Lucky players who win the poker game then get real money payouts which they can cash out into their bank account according to the policy of that gambling site.

While offline poker rooms may offer players comps, online poker rooms have the added advantage of bonuses. The best Canadian online poker sites will offer bonuses to players for signing up and playing regularly. For instance, at 888, players can take advantage of a no deposit bonus worth $88 without any deposit needed. New poker players are also eligible for a 100% Welcome Bonus of up to $400 – which gives you double the money to play with from the get-go – plus free tickets to the $500 first depositors freeroll, $1,000 depositors free tournament, and first depositors’ challenge tournament. 32 Red Casino has its own poker room with special bonuses specifically for poker games. New players can cash in a welcome bonus worth up to $320. After joining, 32 Red poker hosts bonuses for regular players like rakeback bonuses giving you money back for each deposit. Betsson Poker has plenty of rewards and bonuses for players. You can cash in a welcome bonus worth up to $1,000. Meanwhile, you can qualify for even more bonuses like casino credits, cashback rewards, and poker jackpots on tournaments. Betway Poker players can enjoy up to $750 on their first deposits. Betway also rewards up to $9,000 in freerolls and tournaments, making this a lucrative place to play poker. Once you’ve claimed your welcome bonus, stay tuned for other promotions. Poker rooms are pros at these kinds of offers – as it’s in their interest to entice you to keep coming back. Offers vary from site to site, but generally include deposit bonuses, chances at prizes (like iPads or exotic vacations), or a seat at a world-class tournament like the WSOP.

While Texas Hold’em has become by far the most commonly played poker game on the web, the best online poker Canada sites also feature other popular versions of the game. These include:

Online poker’s popularity has had a ripple effect on online casinos, many of which now feature poker-based casino games. Examples of these include:

Casino Hold’Em – Players go up against the computer (or house) in Casino hold’em. The game starts when the player makes an ante wager. Some versions have an optional progressive jackpot side bet. The player and dealer’s hands are scored according to the highest poker value of the two hole cards and five community cards.

Let It Ride – A casino poker game in which the player goes up against the dealer (computer). First, the player receives three cards. The player can cancel the first bet or keep the bet aka “let it ride”. Then the five community cards are dealt in the center. The player has a second opportunity to keep the bet or “let it ride”. Finally, the player is paid according to the value of his five cards, remaining bets, the pay table, and side bets.

Pai Gow – Pai gow poker is played with a 53-card deck including a joker which serves as a semi-wild card. Each player receives seven cards and splits them into two separate hands of five cards and two cards. Each player aims to make the best poker hands out of both hands, but the five-card hand must have a higher value than the two-card hand.

Red Dog – In Red Dog, the dealer places two cards on the table face up and continues according to the following: – If the two cards are consecutive then the hand is a push, and the player’s wagers are returned. – If the two cards equal each other, the dealer draws a third card. If the third card matches, the player receives a pay of 11:1. Otherwise, the hand is a push. – If the cards are not consecutive nor equal, a third card is dealt. The player has the option to double their bet before the third card is dealt. If the card’s value falls between the values of the first two cards, the player receives a payout according to the games pay table.

Video poker: Poker is also the ancestor of video poker — one of the most successful casino games today. Although it’s more like a slots machine than the classic card game, it still gives you some of the five-card appeal of traditional poker play.

Tournaments vs. Sit and Go

There are two basic online poker games available to players on the web: tournaments and sit-and-go.

Tournaments: In online poker tournaments, every player begins with the same amount of chips, and they compete against one another until one gambler has collected all the chips. Tournaments can assume various forms online, with some limited to a single seven- or nine-person table, and others featuring thousands of entrants.

Sit and Go: Instead of committing to a potentially lengthy tournament, players can play at Sit and Go tables. In this case, they choose how much money they want in their stack at any time, and are free to leave the table with what remains of their stack whenever they please.

No matter which kind of online poker you prefer, you can’t beat the excitement of winning real money playing one of the most entertaining games at the casino. Poker combines both skill and luck, making this a particularly interesting gambling option. Develop your skills, and you could win huge sums of money. Whether you play in a tournament or on your own, we highly recommend giving this game a try. Test your luck and see if you’ll come out as the winner with online poker games.