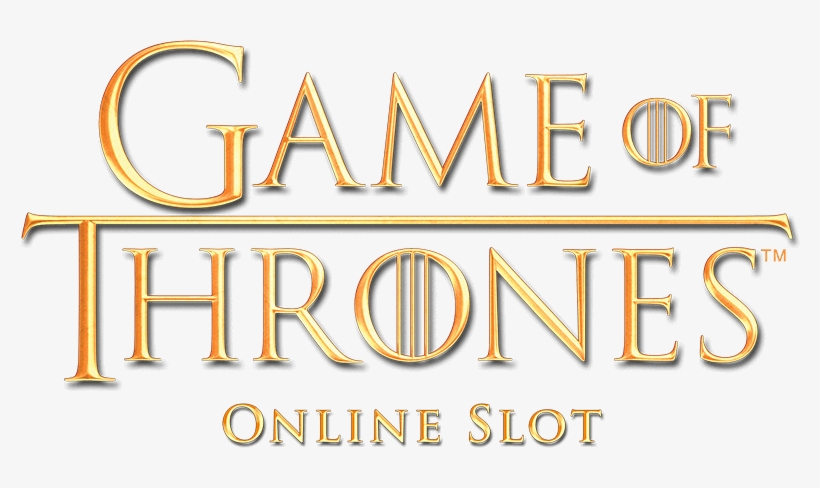 If you loved binge watching the show, then you’ll love binge playing this game. Few slot games derived from movies or TV shows have ever so perfectly captured the essence of that media. In fact Microgaming has produced a Game of Thrones slot so entertaining, it would distract even Tyrion from the brothels and his siblings from each other.

Players get to choose whether to play Game of Thrones as either a 15 payline slot or a 243-ways-to-win machine. Bets vary accordingly, with up to 25 coins, with coin sizes of $0.01, $0.02, $0.05, $0.10, $0.20 and $0.25 on the 15-payline slot; and $0.01, $0.02, $0.05 and $0.10 for the 243 ways to win. The reels include standard J, Q and K symbols, plus special symbols for each of Westeros’ four main houses – Stark, Baratheon, Targaryen and Lannister that payout 350 to 600 coins for five of a kinds. The Game of Thrones logo stands in as a stacked wild both in regular game play as well as the free spin bonus round. The Iron Throne is a scatter symbol that also has the highest payout in the game. The free spin bonus round is the main attraction here. Players can enter the round by landing three or more Iron Throne scatter symbols on the board. They’re then given the option to serve one of the four main Houses of Westeros (as above). Each house offers a unique number of free spins and stacked symbols, as well as special multipliers that look like this:

If you land three Iron Throne scatter symbols during any of the bonus rounds, you will retrigger the feature and get to pick a new house if you’d like. 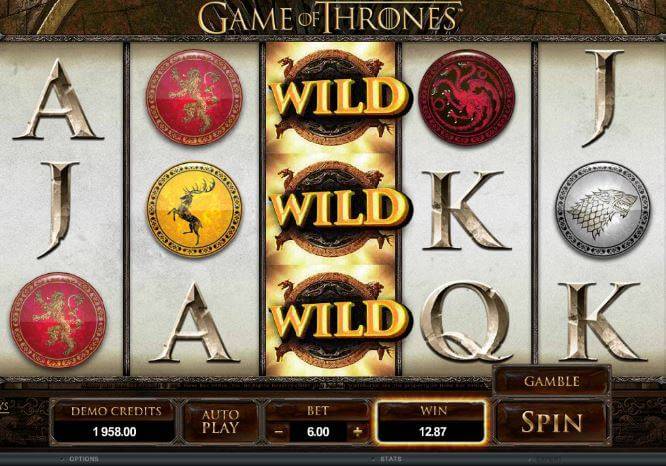 I love these online slots for a variety of reasons, but the top one is really kind of simple: the theme music is an adapted version of the theme song from the television show, and I just freaking love that song. It sets an enthralling mood that puts me right in the zone for spinning slots. And what gorgeous slots they are. The symbols are straight out of Westeros, and the game is interspersed with clips of fire-breathing dragons and breathtaking scenery from the award-winning series. The map of Westeros in the Gamble Feature is a fantastic addition, as are the authentic Braavosi coins. I also love that the reels change colours and texture based on the house favoured during the free spins bonus round. These slot games adapted from moves and TV shows don’t always capture the experience of watching that form of media, but Microgaming absolutely knocked Game of Thrones out of the park. I love The Dark Knight and have enjoyed some of the Marvel slots out there, but none of those games has proved quite as authentic and entertaining as this Game of Thrones piece. 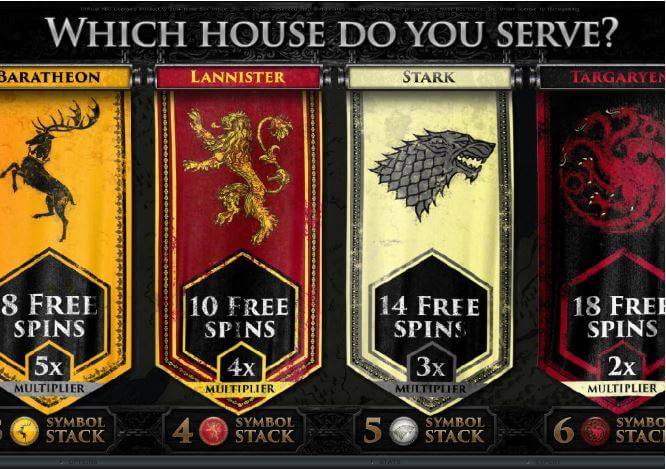 Game of Thrones isn’t really a jackpot slot, per se, like Mega Moolah or The Dark Knight. That said, players can take in some pretty big prizes. For single-spin payouts, the most a player can land in the 15-pay line version of the game is 1,500 coins. On the 243 winning ways version, the biggest payday is 605,000 coins. That said, the 15-pay line version is far less versatile than the 243 ways to win.

There are a few pretty cool nuggets in this game beyond what I described above. For starters, there’s a gamble feature available to players after big wins that’s really a quest through Westeros. Players are allowed to flip a Braavosi coin, and if they guess correctly, they move on to face various figures from across George R.R. Martin’s world, like Three-Eyed Ravens and White Walkers. Another nice feature here is that the slot has stacked wilds across all reels, and if you hit two Iron Throne scatter symbols anywhere on the screen, a fiery dragon’s egg will appear and offer up a random prize to the lucky spinner.

Slot games adapted from movies and TV shows don’t always capture the experience of the original, but Microgaming absolutely knocked it out of the park with Game of Thrones. I love The Dark Knight and have enjoyed some of the Marvel slots out there, but none of those games has proved quite as authentic and entertaining as Game of Thrones slots. To experience a taste of what I’m talking about first-hand, I highly suggest venturing over to a top Microgaming casino like Royal Vegas today, and giving Game of Thrones a whirl.