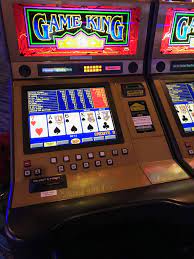 Online Video Poker, while similar to table poker, is much simpler to learn and play. The ease of play makes it a popular choice for Canadian gamblers.

Video Poker is so easy that players don’t need to be as well studied on rules, and also don’t need to worry about competing against other players. Have a look at the video below to see systematic bets and easy gameplay. Once you’ve given it a try, you’ll find it very easy to pick up.

How to Play Video Poker

Here’s a more detailed explanation by Steve Bourie from AmericanCasinoGuide:

Get more control in video poker by deciding which of your cards you get to hold or to fold.

The strategy for making the most money from those decisions is actually quite complex, but if you’re willing to take the time to memorize some tables, you’ll benefit from these video poker tips:

Here is the average payoff for various hands is on a Jacks or Better machine:

Obviously, you want to wind up with a hand as high up on that list as possible, as that’s where the big money is. But it isn’t always as easy as just aiming for the best possible hand.

Strategy in Jacks or Better boils down to one simple decision — after you’re dealt your five-card hand, do you:

Sometimes, your choice is pretty easy — if you’re dealt four of a kind, for example. there isn’t any situation where you’d want to swap any of those four cards.

When to Keep and When to Discard

Things aren’t always so clearcut. Let’s look at another example:

It’s decisions like that that will get you as close as possible to even odds with the machine.

Of course, in dropping one or both of your paired cards and going for a picture card, you swap a bird in the hand for two in the bush, so to speak. But doing so or not depends on your strategy and appetite for risk.

In Jacks or Better, you’re going to want to make the swap.

If you can keep this list handy — or even better, memorize it — then you’re giving yourself the best chance to win in video poker.

The video poker winning strategy for Deuces Wild is similar to Jacks or Better, but the fact that all the 2s are wild cards adds an extra layer:

If you have four deuces, obviously you want to keep them all for five of a kind. Depending on your fifth card, and how many swaps you have, you may want to swap out a low card in the hope of getting a picture card — but this would only matter if playing with multiple decks or Jokers included.

And if you get three deuces, you’ll generally want to keep just those three cards, unless you are dealt a royal flush. Things are more complicated if you’re dealt either one or two deuces.

Double bonus poker is very similar to Jacks or Better, with the twist that A, 2, 3 and 4 cards have a little extra value.

You can get really specific with your hand preferences — but if you already have the Jacks or Better table handy and/or memorized, you’d be well served to simply give hands featuring multiple A, 2, 3 or 4 cards a bump up a few rungs – check out Royal Vegas offer. 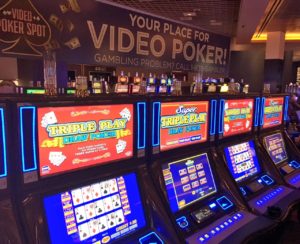 Joker Wild and Deuces Wild poker are going to be very similar.

The key difference is this: there are four deuces in a standard deck of cards, but just two Jokers. This means your return on investment isn’t going to be quite so strong as in Deuces Wild, but the rarity with which the Jokers turn up makes it a more fun game to win, if that makes sense.

That said, if a Joker does show up in your initial five-card hand, refer to the Deuces Wild table above and basically you can follow that to the T. If you don’t get dealt a Joker, treat the game as if you’re playing a regular Jacks or Better hand.

Video poker is a cross between classic poker and an online video slots game. While it is less skill-dependent than poker, it is less luck-dependent than slots. Playing video poker online requires that you learn your bets, but the game itself is simple and has several advantages over slots or traditional poker games.

When you combine a liberal pay table and a player’s skill, you get a thin advantage and a great rate of return. Some games return more than 100% of your original bet!

Online video poker is unique—unlike other popular casino games, the pay table indicates the return on your gambling dollar. Consider it a rare chance to stay informed.

Video poker is a skill game though. One with simpler rules than you’ll find elsewhere in the casino. The game is in your hands, and with practice and a wise betting strategy you can only improve.

Video poker is one of Canada’s favorite online casino games for a reason. It’s a great way to be introduced to the world of poker without the pressures that come from gambling against outside competition.

The rules are simple and easy to understand, and players can get hooked in front of their computers or on their mobiles wagering away for hours. Spend enough time practising and you can master the strategies involved, turning winning hands into nice paydays.

We especially recommend you check out the video poker offerings at Royal Vegas. Use the demo mode above to play free online video poker, and see our list below with video poker casino offers.